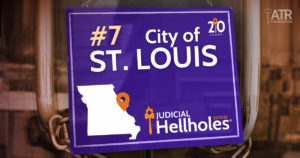 St. Louis has yet again been labeled a “Judicial Hellhole” in a new report from the American Tort Reform Foundation.

While the Missouri Chamber of Commerce and Industry has successfully championed a number of critical legal climate reforms in recent years, American Tort Reform Foundation ranking places the onus on St. Louis courts to fall in line and implement the new laws.

The City of St. Louis Circuit Court’s lax attitude toward forum shopping and out-of-state lawsuits contributed to its No. 7 ranking this year, as well as judges allowing questionable scientific evidence in high-profile cases.

The report also cites multiple high-profile lawsuits in St. Louis that are riddled with controversy, including the talc baby powder lawsuit involving 22 plaintiffs, the majority of whom had no connection to Missouri. The plaintiffs claimed their ovarian cancer was caused by exposure to asbestos, allegedly found in Johnson & Johnson’s baby powder. In June 2021, the U.S. Supreme Court announced it would not review the verdict.

St. Louis, along with fellow Judicial Hellhole® California, is also home to tens of thousands of lawsuits against Bayer AG involving Roundup® weedkiller. The lawsuits allege that the active ingredient, glyphosate, causes non-Hodgkin lymphoma. ATRF’s report points out that while St. Louis’s trials are delayed due to settlement talks, the few that proceeded in California relied solely on an unfounded report by the International Agency for Research on Cancer (IARC). IARC deemed glyphosate a carcinogen, disregarding multiple agencies and organizations, including the U.S. EPA, which said glyphosate is safe to use.

Courts in the Gateway to the West also top the charts for asbestos lawsuit filings, with the fifth-highest number of suits filed. Two of the top four jurisdictions, however, are neighboring counties Madison and St. Clair in Illinois.

However, there is still more work to do.

Judicial Hellholes® are deemed the most unjust local courts and state civil justice systems in the country. Read the full report at JudicialHellholes.org.