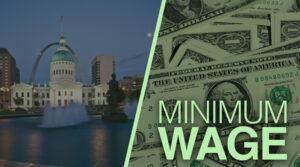 On May 4 in a St. Louis circuit court, Judge Steven Ohmer lifted the injunction on a city ordinance allowing St. Louis City to raise its minimum wage to $10 an hour. The increase goes into effect on May 5.

“This move will raise labor costs up to 25 percent for some St. Louis City employers,” said Missouri Chamber president and CEO Dan Mehan. “In the short run, it will require businesses to scramble to comply with the new law. In the long run, it will cost jobs and set an already struggling St. Louis City economy even further behind.”

Under the ordinance, employers paying minimum wage in St. Louis City are required to increase that rate to $10 or face fines and jail time. The rate is scheduled to increase to $11 an hour on January 1, 2018.