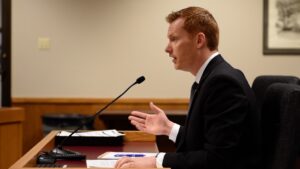 If you’ve earned a professional license in another state, you shouldn’t have to start over from scratch when you move to Missouri.

Today, nearly one in four occupations require a license to practice. But several licensed professions — including many in health care and other industries in dire need of workers in our state — are currently excluded from Missouri’s existing license reciprocity law.

This means professionals in those industries coming to our state have to complete redundant training and often face a long wait before being able to work.

Rep. Derek Grier, a Republican from Chesterfield and a 2019 Business Champion, has taken up this workforce issue.

His legislation, House Bill 2046, would remove these exclusions and require that licensure by reciprocity for those professions be the same as any other licensed profession in Missouri.

The bill was heard in a House Committee on Jan. 14. The committee passed it on Jan. 15 and the bill will now proceed in the next step in the legislative process toward becoming law.

“If we could make it easier for people who are already licensed in another state come to Missouri and contribute to our economy, that would be extremely impactful, and that’s exactly what this bill does,” Grier said in the hearing.

Among those testifying in favor of the bill were the Missouri Chamber, the St. Louis Regional Chamber and the Cape Girardeau Area Chamber.

John Mehner, president & CEO of the Cape Girardeau Chamber and a Missouri Chamber Board member, said this change would give his region a competitive edge in talent attraction — particularly in the common situation where a professional considering relocation has a partner with a license who is also seeking work.

“Oftentimes in Cape, we are competing for key personnel at one of our major hospitals, manufacturing firms or professional organizations, and they bring with them someone else who is either licensed or in one of these other fields,” said Mehner. “Little, tiny things sometimes make the difference, and so a more open reciprocity process that makes that an easier move is one of those things we’ve heard about repeatedly in that arena.”

In a state where only 44 percent of Missouri business owners are satisfied with the availability of skilled workers, expanding license reciprocity will help attract much-needed workforce. This policy change is part of the Missouri Chamber’s Preparing the Workforce agenda in our strategic initiative Missouri 2030.

“We hear from our members weekly that they have jobs to fill but they can’t find the workers to fill them, therefore we do support a comprehensive approach to workforce development in our state. This includes policies that work to streamline and remove barriers to licensure,” testified Kara Corches, Missouri Chamber director of legislative affairs.

Grier noted that the bill also contains important protections, including the requirement that an applicant for licensure by reciprocity must have held their license in another state for at least one year. In addition, an applicant must not have a disqualifying criminal record, had their license revoked or be the subject of a pending investigation.

No one testified in opposition to the bill.