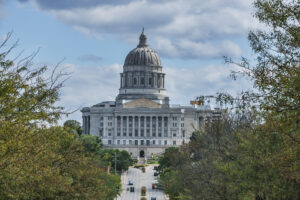 Ahead of the 2018 Legislative Session, the Missouri Chamber of Commerce and Industry has released a set of pro-business priorities to help guide lawmakers as they seek to build on the historic progress made last year.

In 2017, the Missouri General Assembly and Gov. Eric Greitens passed right-to-work into law, enacted legal climate reforms and fully funded the state’s education formula, among other achievements. The changes have drawn national attention and caused Missouri to jump in rankings of economic competitiveness. However, the Missouri Chamber’s new Legislative Agenda makes it clear that the job is not done.

“This past summer we celebrated when CNBC rated Missouri the nation’s 22nd best state for business — up from 31 last year. Not to detract from that achievement, but 22nd place is not our goal. We want Missouri to be an economic leader and our 2018 Legislative Agenda provides a clear, achievable roadmap for lawmakers to follow,” said Daniel P. Mehan, Missouri Chamber president and CEO. 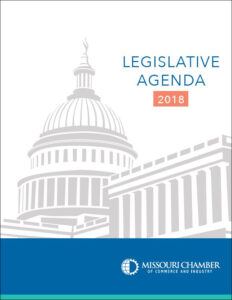 Work toward one of the Missouri Chamber’s top legislative goals in 2018 — protecting the new right-to-work law — will actually happen outside the State Capitol. A challenge via referendum placed the right-to-work law on the ballot for voters to decide. Now, the Missouri business community must unite to help keep the law in place. Voters need to understand why right-to-work status can lead to more jobs and prosperity for all Missourians.

“We know there will be a tremendous amount of resources poured into defeating our state’s right-to-work law. For us to stand a chance, the business community needs to stand up and make it known why right-to-work is good for business and good for workers,” said Mehan. “We cannot afford to move backward on this issue. In today’s global economy, we need to do everything we can to help Missouri get ahead, and that starts with protecting right-to-work.”

In addition, Missouri lawmakers must continue their work to reform the state’s legal climate. The 2018 Legislative Agenda supports several reforms, including: clarifying venue and joinder laws, enacting punitive damage reform, strengthening the Missouri Merchandising Practices Act and reinforcing the arbitration agreement system in the state, among other proposals.

“Just one year ago we faced a situation where national organizations were labeling part of our state a ‘Judicial Hellhole’ and our legal climate was ranked among the worst states in the nation. The reforms passed last year have changed the conversation for the better,” said Mehan. “However, there are still several key areas where legislation is needed to bring fairness to Missouri courts. We are proposing a set of common sense changes to help make this happen.”

The 2018 Legislative Agenda also includes ideas to improve the state’s workforce development system, bolster transportation and help the state become more attractive for business investment. These goals are all guided by the Missouri 2030 strategic plan. The plan, available at MO2030.com, was designed by the Missouri Chamber and informed by input from more than 1,000 Missouri business leaders. Since it was unveiled in 2015, the Missouri Chamber has made strong progress toward achieving the goals of Missouri 2030, with 2018 providing another opportunity to move Missouri forward.

“We have to realize that 2030 is closer than we think. While we had success in 2017, in many ways we are just getting started with the tremendous work ahead,” said Mehan. “As lawmakers prepare to convene in Jefferson City, the Missouri Chamber would like to thank them for their service and remind them that the business community remains a strong advocate for their efforts to make Missouri one of the best places to do business.”