Unbalanced tort system is the reason St. Louis has been named the nation’s worst Judicial Hellhole

St. Louis is the nation’s most unfair civil court jurisdiction according to the American Tort Reform Association’s 2016-2017 Judicial Hellholes report released today. The Circuit Court for the City of St. Louis has become a magnet for product liability lawsuits and consumer class actions lawsuits, fueled by Missouri courts’ lax standards and bias against employers, according to the report. 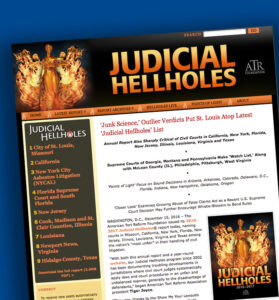 “The overwhelming majority of plaintiffs filing these suits are not from St. Louis, or even from Missouri,” said Tiger Joyce, president of the American Tort Reform Association. “They travel from across the country to exploit a weak venue law as their lawyers spend heavily on television advertising that works to prejudice potential jurors against defendants.”

The Missouri Chamber of Commerce and Industry was dismayed but not surprised by the ranking.

“The facts cited in ATRA’s report are all too familiar to those of us who see the impact of Missouri’s unbalanced tort system on our state’s job creators, while politicians funded by the trial bar turn a blind eye,” said Dan Mehan, Missouri Chamber president and CEO. “Trial attorneys have poured millions into Missouri’s politicians to maintain their grip on our state courts and it is costing Missouri jobs. However, we believe that stalemate is about to come to an end with a new administration.”

During Gov. Jay Nixon’s time in office he has vetoed legislation to reform Missouri’s tort system, including employment law, collateral source and expert witness reforms. Trial attorneys are among Gov. Nixon’s top political funders and he has received millions in contributions from that special interest. According to Money Trail, the Missouri Chamber PAC website that tracks trial attorney political contributions, Gov. Nixon has received nearly $1 million in contributions from trial attorneys since Jan. 1, 2012, during an election cycle in which he wasn’t running for office. Nixon will be joining the Clayton law firm Dowd Bennett when he leaves the governor’s office next month.

In contrast, Governor-elect Greitens lists tort reform among his priorities.

“The reforms Gov. Nixon vetoed are not outlandish ideas,” said Mehan. “They are common-sense reforms, often aligning with federal standards and the standards held by the majority of other states. We are trying to balance the scales of justice, nothing more. Right now the courts are skewed against employers and that fact is getting national attention.”

Missouri’s legal climate is one of Missouri’s business community’s deepest concerns. According to a Missouri Chamber-commissioned Gallup survey of more than 1,000 Missouri CEOs and business owners, less than one in four Missouri employers are satisfied with the state’s litigation climate.

The Missouri Chamber calls for an array of civil justice reforms to: