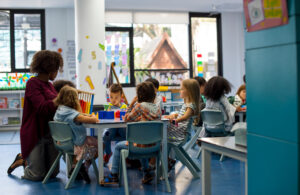 Following a recent report illustrating the lack of childcare in Missouri, Lt. Gov. Mike Kehoe has launched a new effort to address the problem.

In November, the Untapped Potential study found that the limited supply of childcare does not match high demand in Missouri — a situation that exacerbates the state’s current workforce shortage.

The shortage is estimated to be costing Missouri’s economy $1.35 billion annually. That statistic includes a $280 million annual loss in tax revenue due to childcare issues.

The study also showed that 28% of respondents in Missouri reported that they or someone in their household has left a job, not taken a job, or changed jobs because of problems with childcare in the last 12 months.

With the problem now in clear view, Lt. Gov. Mike Kehoe has established a task force to help identify solutions to help Missourians have better access to childcare.

The task force is currently studying several ideas, starting with simply creating a plan that would assist anyone interested in establishing a new childcare facility understand the regulations and procedures required to open the business.

The group is also studying ways the government could form partnerships between employers and childcare providers that would help businesses provide childcare as a benefit. Along these lines, the task force is looking to bring ideas from a similar program developed in Iowa to Missouri.

During his remarks at the recent Missouri Chamber Transportation Future Summit, Lt. Gov. Kehoe spoke about the effort and said that it’s possible that legislation might be required. He noted that there are bills filed in the Missouri Senate now that could provide a path toward statute changes if necessary.

The Missouri Chamber is serving on the task force and working closely with Lt. Gov. Kehoe on this effort.

Moving forward, the task force is looking for input from businesses to help guide this work.

They specifically want to learn about businesses that currently offer childcare facilities on-site. They also want to hear from employers who have considered offering childcare and what issues they ran into. Any input would be greatly appreciated.