When Peggy Albers was released after more than 15 years of prison time, she was determined not to go back.

When Albers asked her father what she should do to help get back on her feet, he encouraged her to apply for a realty license. But the licensure board rejected her application because she had a criminal record.

Albers testifies in favor of SB 647.

“Everybody knows the recidivism rate is extremely high,” Albers said. “You come out, you don’t have your clothes, you are dependent on other people for your phone, your car, everything. So your first instinct is to do the wrong thing.”

However, with her family’s support, Albers successfully won a case against the realtor board and obtained a probationary license to sell real estate.

Albers wasn’t just at the Senate committee hearing to tell her success story — she was there to urge the legislature to remove barriers for other people like her by passing a bill stating that occupational license applicants cannot be barred from receiving a license just because they have a past criminal offense.

“Without fighting for my license, I couldn’t have got it. But most people give up,” Albers said. “I had a family support that pushed me to fight. Most people who go to prison don’t have the family support…Everybody deserves a chance to be the best that they can be, and if you can only do it by getting a license, you have to give them that chance.” 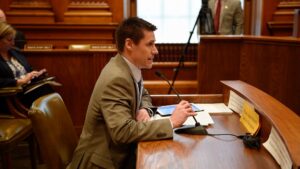 Sen. Koenig presents his bill to a Senate committee.

The legislation being heard was Senate Bill 647. The bill, nicknamed the “Fresh Start Act,” is sponsored by Sen. Andrew Koenig, a Republican from Manchester and a 2019 Missouri Chamber Business Champion.

Employment is a widely recognized method to reducing recidivism. With nearly one in four jobs requiring a license, this bill would be an important tool to do just that.

“When someone gets out of jail, if they can’t get a job, they might resort back to crime,” said Koenig. And I would prefer that it’s the business owner that determines whether or not that person is reformed and whether or not they want to hire that person, rather than government.”

“We know we’re in the midst of a workforce shortage, therefore we support policies that remove barriers to entry to the workforce,” testified Kara Corches, Missouri Chamber director of legislative affairs.

The bill does include a safeguard exception in the case of an applicant having a criminal charge directly related to the industry they are applying for a license in.