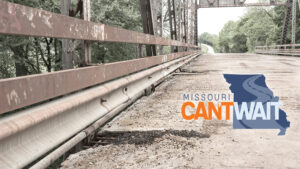 A broad coalition of stakeholders has come together to inspire action on one of the most important competitiveness issues Missouri is currently facing – our transportation funding crisis.

“It is a crisis that impacts nearly every economic sector in our state. That’s why we are working together as a force to tell lawmakers that choosing to ignore the issue is choosing deteriorating, unsafe roads and economic decline for Missouri,” said Dan Mehan, Missouri Chamber president and CEO.

Missouri has not increased the gas tax or registration fees since the 1990s. Initiatives have been voted down at the ballot box in Missouri, while other states, including most of Missouri’s neighboring states, have secured increased transportation investment either through elections or legislative action.

“It’s frustrating to see Missouri roads crumble, while we send our workers to other states to build other states’ transportation projects,” said Jake Hummel, president of the Missouri AFL-CIO. “Investment in our infrastructure will increase safety for all Missourians and create and sustain good jobs.”

2021 may be the year to end that frustration as lawmakers are currently considering a legislative funding package that could provide nearly $500 million in increased transportation investment. The bill, sponsored by Sen. Dave Schatz, would phase in a gas tax increase over five years. The legislation has been passed by the Missouri Senate and awaits consideration by the Missouri House.

“Our qualified heavy highway contractors have the skill and expertise to build Missouri’s roadways on time and on budget,” said Jeremy Bennett, Executive Director of SITE Improvement Association. “This ensures the proper use of taxpayer funds to expedite road projects safely and effectively.”

“St. Louis drivers spend 46 hours per year in congestion,” said Kathy Osborn, president and CEO of the St. Louis Regional Business Council. “That’s a full work week gone. That’s gallons of gas, wasted. That’s thousands of idling trucks slowing commerce and raising consumer costs. We hardly have the funding to maintain the roads and bridges that we have, much less expand the system to alleviate this growing problem in our metros.

“Being within a day’s reach of half of Missouri households, manufacturers and agriculture producers is an incredible economic advantage,” said John Sebree, CEO of the Missouri Realtors Association. “But that advantage evaporates if we allow the connections to those markets to deteriorate.”

“If we want businesses to invest in our state, we must provide assurances that the foundation upon which they are staking their business future is strong,” said Max Cook, president and CEO of the Missouri Bankers Association. “The shrinking buying power of our road and bridge fund is one of our state’s most concerning economic liabilities.”

These associations, some of the most influential business groups in the state, carry a lot of weight with the Missouri General Assembly.

“We hope by showing lawmakers just how far-reaching this call for action is, they will work to resolve this critical need,” Mehan said.

To see a full list of supporting organizations or to add your name to the list of supporters, go to the Missouri Can’t Wait website at www.missouricantwait.com.