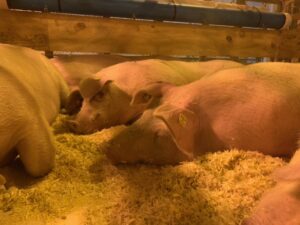 “This is exciting progress for the state and shows that Missouri’s strong agricultural industry continues to power our economy. Missouri has long worked to push agricultural technology forward. What we are seeing today is how Missouri innovations and infrastructure are allowing us to market the industry to the world in a new way. We will continue to advocate for Missouri industries as we work to grow our economy and showcase all our state has to offer,” said Governor Mike Parson.

LEIF is an 18,000-square-foot dedicated and customizable facility designed for shipping livestock. It has a 12,000-square-foot adjacent open bay that was utilized to load the partial plane to Brazil. The shipment to Brazil demonstrates an aggressive new strategy for overseas exports at St. Louis-Lambert Airport and is the first of several planned shipments.

LEIF is the only on-site 24/7 livestock palletizing facility in the United States and is uniquely situated to provide service to livestock exporters. Within six hours exists a six-state livestock-rich supply area – Missouri, Illinois, Indiana, Kansas, Oklahoma, and Arkansas. Missouri has consistently ranked in the top three for number of livestock, and other top-producing states for swine, cattle, goats, and sheep are all a short drive away.

“This is a very important step forward in our years-long effort to open a new gateway from Missouri to the global economy. This progress leverages Missouri’s logistical strengths and geographic position to create a new economic opportunity in the agri-business sector at a time when we need it most,” said Daniel P. Mehan, chairman of the Midwest Cargo Hub Commission and President and CEO of the Missouri Chamber of Commerce and Industry.

“This is exactly the type of action called for by the Missouri Chamber’s recently-released Transportation2030 report. It took years of collaboration by many organizations to get to this point.”

“I want to thank the St. Louis County Port Authority for their tremendous support in establishing international freight hub incentives at St. Louis Lambert International Airport, and the World Trade Center St. Louis for administering this program to increase air exports. This initiative will help elevate St. Louis’ role in global commerce,” said Rodney Crim, CEO and President of the St. Louis Economic Development Partnership and a commissioner of MCHC.

Chad Sayre, Chairman of NCBE added, “We are crossing a threshold a long time in coming. This could open up active trade around the world for Missouri and Midwest livestock. Our producers, family farmers, agribusinesses and research institutions all can benefit from creating this portal to the world market. I congratulate STL, the Midwest Cargo Hub Commission and thank the Missouri Department of Agriculture.”