Signed into law — A look at Missouri’s newest statutes 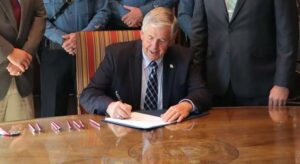 Since the end of the 2018 Legislative Session, dozens of bills have been signed into law. Here is a look at some Missouri Chamber legislative priorities that are being added to the state statutes.

Modernizing our energy infrastructure
This new law will bring Missouri energy consumers more stable and predictable rates as well as improved energy reliability. It already led to an upcoming 6.1 percent energy rate decrease. The bill will also cap electric rates so that utility bills are more stable and predictable. For the first time in state history, future rate increases would be capped at an average annual rate of 2.85 percent or 3 percent. The provisions were included in Senate Bill 564 by Sen. Ed Emery, a Republican from Lamar.

Preventing unjust premises liability suits
Missouri businesses will no longer have to worry about being sued over on-site criminal acts that they could not have prevented. The newly-signed Business Premises Safety Act holds that a business is only responsible for criminal or harmful acts on its property when it knows or has reason to know such acts are or are likely to be committed in a particular area and there is enough time to prevent them. A business can also claim as affirmative defenses that it had implemented reasonable security measures, the incident occurred when the business was closed, or that the claimant was a trespasser or committing a felony. This language was sponsored by Sen. Denny Hoskins in Senate Bill 608. Hoskins is a Republican from Warrensburg.

Extending Missouri Works
Two of Missouri’s most popular and successful job-creation incentives were nearing expiration, but a new law has extended the sunset date. Now Missouri job creators will be able to continue to make good use of the Missouri Works and Missouri Works Job Training programs through 2030. This was included in House Bill 1415 by Rep. Jeanie Lauer, a Republican from Blue Springs.

Lowering the tax burden
One new law signed this summer will give Missouri the second lowest corporate tax rate in the nation, cutting the rate from 6.25 percent to 4 percent. The rate drop will start in 2020. This was included in Senate Bill 884, sponsored by Sen. Andrew Koenig, a Republican from Manchester. Individual Missouri taxpayers will also see a tax cut, with the individual tax rate dropping incrementally from 6 percent to 5.1 percent if state revenue reaches certain levels. House Bill 2540 was sponsored by House Speaker Pro Tem Elijah Haahr, a Republican from Springfield.

Highlighting Missouri-made products
One week in mid-October will now be set aside as the official “Buy Missouri Week.” The week will encourage the support of businesses that produce and sell goods made in Missouri. This was included in Senate Bill 891, sponsored by Lt. Gov. Mike Kehoe, who was a Senator from Jefferson City when the bill was passed.

Bringing business knowledge to the classroom
This new law will help business professionals who want to share their knowledge in Missouri classrooms avoid the lengthy, costly teacher certification process. Business professionals will now be able to receive a one-year visiting scholar certificate if they complete an application and a background check. The certificate can be renewed twice. The change will help boost Missouri’s Centers for Advanced Professional Studies, often called CAPS, programs which give high school students the opportunity to test drive possible career options before they graduate. These provisions were included in House Bill 1665 by Rep. Kathy Swan, a Republican from Cape Girardeau.

Expanding teacher externships
This summer the Missouri Chamber offered a program that allowed St. Louis-area educators to explore in-demand careers in their community. This experience, called Show-Me Careers, will help them inform students about good career paths. A new Missouri law will help encourage more teachers to take part in this same opportunity. In addition, the law provides greater flexibility for students to take ACT WorkKeys in any year the state funds statewide assessments. This new law was included in House Bill 1415 by Rep. Lauer.

Providing high quality virtual education options
Missouri students will now have access to virtual education courses, providing them with learning opportunities that may not have been otherwise available in their local districts. It will ensure that no matter where students are located in Missouri, they all have equal access to high quality coursework. These provisions were included in House Bill 1606 sponsored by Rep. Elaine Gannon, a Republican from Desoto.

Protecting public employee paychecks
Missouri public employees will now have an easy way to opt out of union membership and stop any paycheck deductions that might fund the union’s political activity. In addition, the law requires consent to withhold paycheck earnings and also compels unions to seek authorization from members to use dues for political purposes. These changes were included in House Bill 1413, sponsored by Rep. Jered Taylor, a Republican from Nixa.

Keeping public project costs in check
This new law will help keep expenses in-check on taxpayer-funded projects. It mandates that prevailing wage must be paid only after expenses reach a $75,000 project threshold. Also, each occupational title in a county must have 1,000 reportable hours in a year for prevailing wage to be required. These provisions were included in House Bill 1729, sponsored by Rep. Jeffery Justus, a Republican from Branson.