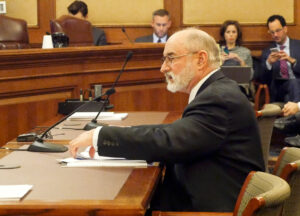 Missouri’s venue and joinder laws put out a welcome mat for out-of-state trial attorneys exploiting the system by trying to win outlandish judgments against out-of-state businesses.

All attorneys have to do to get in the door is name a Missouri business as one of the defendants. And once they’re in, they can stay, even if that business is later dismissed. Cases like this between out-of-state parties slow down our court system and hinder the timely resolution of legal disputes between Missouri-based parties.

But this problem could be solved by Senate Bill 546, sponsored by Sen. Brian Munzlinger, a Republican from Clarence. Munzlinger shared some concerning numbers at the bill’s first committee hearing.

The Missouri Chamber of Commerce and Industry has long advocated for legislation that would reform the state’s venue laws.

“Missouri has been highlighted negatively over the past several years for ‘forum shopping’ done to bring cases into friendly jurisdictions for plaintiffs and their claims,” said Justin Arnold, general counsel for the Missouri Chamber. “Our employer businesses are being hauled into courtrooms where venue should not be allowed and our venue statute has been widely stretched and repeatedly misinterpreted by judges hoping to keep cases inside their courtrooms.”

The corresponding House legislation for SB 546 is House Bill 1578, sponsored by Rep. Glen Kolkmeyer, a Republican from Odessa.

For more information, contact Justin Arnold at jarnold@mochamber.com or 573.634.3511.