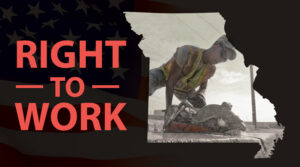 It’s been over a year now since Gov. Eric Greitens signed right-to-work into law in Missouri.

The passage of the law seemed to settle a half-century long discussion over whether Missouri would join with dozens of other states and ensure that workers are not required to join a union and pay dues.

The provisions were included in Senate Bill 19, sponsored by Sen. Dan Brown, a Republican from Rolla.

At the time of the signing, Missouri was the 28th state to pass these protections into law. However, while the law remains on the books, it has not yet gone into effect.

Under normal circumstances, Missouri’s right-to-work law would have taken effect on August 28, 2017. However, labor groups gathered signatures over the summer to force a referendum on the new law.

Since the signatures were delivered to Jefferson City before August 28, implementation of right-to-work in Jefferson City was put on hold pending the outcome of a statewide vote on the issue.

Currently, the vote is scheduled to take place on Nov. 6. However, lawmakers are considering whether to move the vote earlier, to the August 7 primary date.

No matter the date, the outcome of the vote will decide the fate of the right-to-work bill passed in 2017.

However, that vote may not even be the most important right-to-work vote of the election season. It’s possible that Missourians may also vote on up to two right-to-work constitutional amendments later this year. One amendment could essentially halt all future efforts to bring right-to-work protections to Missouri while the other would enshrine right-to-work in the state’s constitution.

The Missouri Chamber is closely monitoring every aspect of the upcoming right-to-work vote later this year.

Enacting right-to-work is an important provision of the Missouri 2030 plan, a statewide strategic plan for growth.

Even though Missouri’s right-to-work law has not yet gone into effect, just having the law signed by the governor has led to increased interest in bringing business investment to the state, according to Missouri’s top economic development official. Likewise, company relocation experts have said the state’s right-to-work law puts Missouri in play for more expansion projects.