Addressing the opioid crisis with a PDMP 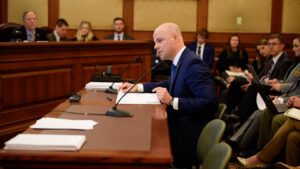 Proposals to combat Missouri’s opioid epidemic with a prescription drug monitoring program return to the state legislature again this year.

Missouri is the only state in the nation that lacks a statewide prescription drug monitoring program, or PDMP. This program would serve as a critical tool physicians and pharmacists need to identify patients who “pill shop,” a practice where people can attain multiple prescriptions from different doctors across a region.

“PDMP will help hospitals with early detection and treatment for children born with opioid dependence, it will help physicians better identify patients at risk of opioid abuse, and improve overall health treatment in our state,” Luetkemeyer said at the bill’s committee hearing on Jan. 27.

Jim Marshall, who lost his son Cody to an overdose, testified in favor of the bill.

Marshall also cited statistics from other states that have recently adopted PDMPs, saying Florida reduced 35,000 attempted multiple prescribers down to 550 in the first year of PDMP implementation.

“Right now the St. Louis County Health Department’s PDMP covers about 87% of Missouri’s population. Unfortunately, that equates to just over 50% of Missouri’s counties. We need a state-wide program that ensures all are covered,” said Rehder (R-Sikeston), a longtime PDMP proponent and a 2019 Missouri Chamber Business Champion.

The Missouri Chamber has testified in favor of both bills and is strongly supporting the PDMP measure as it moves through the legislature. In 2019, the Missouri Chamber conducted a poll and discovered that Missouri businesses now consider health insurance expenses to be their second biggest concern. Not only would a PDMP help address the trends of pill shopping and addiction in our state, the program would also help drive down the costs associated with such prescription drug abuse for employers.