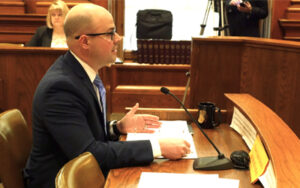 Missourians in support of creating a statewide prescription drug monitoring program gathered in the state capitol on Jan. 30 to advocate for this important cause.

Missouri is the only state in the nation that lacks a statewide monitoring program, often called a PDMP. This critical tool allows physicians and pharmacists to identify patients who “pill shop,” a practice where people can attain multiple prescriptions from different doctors across a region.

On Jan. 30, House and Senate committees held hearings on legislation to address this issue.

Rep. Holly Rehder, a Republican from Sikeston, is a longtime PDMP proponent and is the sponsor of House Bill 188.

“This is a piece of legislation aimed at protecting families against the devastation caused by the opioid epidemic and the abuse and addiction that result therefrom,” Luetkemeyer said.

The Missouri Chamber of Commerce and Industry joined supporters in testifying in support of creating a statewide PDMP.

“Our members are really invested in their communities across the state and opioid addiction is ripping apart communities,” said Matt Panik, vice president of governmental affairs. “We want our communities to thrive, we want our state to thrive and PDMP is one part of the solution.”

Howard Jarvis, MD, is an emergency medicine physician at CoxHealth Springfield. He said opioid emergencies are becoming common and that having access to a statewide PDMP would help address the issue.

A statewide PDMP could have helped save the life of Kevin Arbini who died of an opiate overdose in 2009. After his death, Kevin’s mother, Kathi, learned how her son had visited several different medical facilities and complained of pain, tricking caregivers into giving him an excessive amount of opioid prescriptions.

“So, no matter where he went, he knew what to say,” she said. “And eventually that killed him.”

James Marshall lost his son, Cody, in 2011 to a Xanax and heroin overdose.

“How are we going to monitor whether kids are on the up and up with this stuff?” Marshall asked. “Suicide’s gone up because of the mental health crisis with teenagers. They are self-medicating. Suicide is self-medicating, using a pill is self-medication for a lot of our kids — and 85 percent of all heroin users start with a prescription pill.”

Randall Williams, MD, director of the Missouri Department of Health and Senior Services, said having a PDMP would play an important role in saving lives in Missouri.

“I hear constantly from families that it was prescription drugs that started them on this pathway to these street drugs,” Williams said. “And so, we can debate many things about the PDMP, but the one thing we do know is it does decrease prescriptions, which we think is crucial.”

Rep. Rehder is asking business leaders to contact their elected officials in Jefferson City and share how opioid abuse is impacting their businesses. This grassroots action can help this legislation finally pass this year.