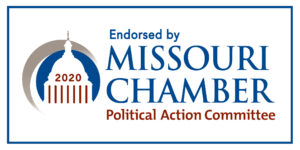 The Missouri Chamber Political Action Committee has released its full slate of endorsements ahead of the November 3 General election. As Missouri seeks to rebound from the economic crisis caused by the COVID-19 pandemic it will be critical to elect leaders who are committed to rebuilding our economy and growing jobs in our state.

“We know that this has been a difficult year for many Missourians. As we head to the polls, we are asking Missourians to vote for candidates who are ready to come to Jefferson City and work on legislation to rebuild, revitalize and reimagine our state’s economy,” said Daniel P. Mehan, president and CEO of the Missouri Chamber of Commerce and Industry. “I hope Missourians are excited about voting on November 3 because this election will have major implications for the future of our state. Let’s make sure we continue our state’s progress toward growth and economic competitiveness by supporting candidates endorsed by the Missouri Chamber Political Action Committee.”

At the top of the state ticket, the Missouri Chamber PAC is encouraging voters to elect Gov. Mike Parson. 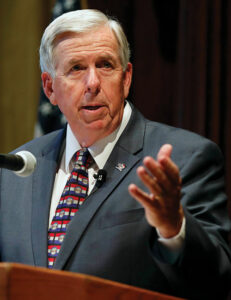 “Gov. Mike Parson is a champion for the state of Missouri,” said Mehan. “Since day one, he has focused his administration on growing our economy by enhancing our state’s efforts to prepare Missourians for the workforce. He is a tireless advocate for improving Missouri’s transportation infrastructure — a critical need for our state’s future. And as we work toward a strong recovery from this pandemic, Gov. Parson has consistently voiced support for measures to ensure opportunistic COVID-19 lawsuits don’t derail our economic revival. We look forward to continuing to work with Gov. Parson to help grow jobs and build a better Missouri.”

“Lt. Gov. Mike Kehoe has long been at the center of Missouri’s efforts to grow jobs and become more competitive for business growth,” said Mehan. “As a lawmaker he helped lead the charge on numerous pro-jobs efforts, including reforming Missouri’s job-crushing legal climate. Kehoe has also been a lead advocate for Missouri transportation infrastructure while also pushing for needed changes to the state’s unemployment insurance system. The Missouri Chamber PAC strongly supports Lt. Gov. Mike Kehoe and encourages Missourians to support Lt. Gov. Kehoe on Nov. 3.”

The Missouri Chamber PAC is also endorsing 42 candidates for seats in the Missouri General Assembly.