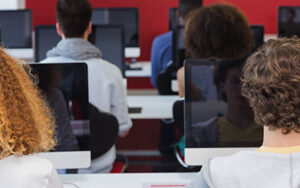 In today’s world, a high school diploma is in most cases a prerequisite for work.

However, this is a major problem for the estimated 500,000 Missouri adults who have not completed their high school education.

This situation is well understood by MERS Missouri Goodwill Industries. The organization is the state’s largest provider of welfare-to-work services, which are funded in part by the proceeds from the group’s well-known consignment stores.

“When you don’t have a high school degree, it’s hard to support your family and yourself,” said Mark Arens, executive vice president of MERS Missouri Goodwill Industries.

Arens said about 85 percent of the people who come to Goodwill for job training services do not have a high school degree.

For people who don’t complete high school on time, there are limited options in Missouri to finish later in life — and those options evaporate at age 21.

But that would change under a plan by Goodwill to establish four adult high schools in Missouri. The high schools were authorized under House Bill 680, which was passed into law in 2017.

In October, Goodwill plans to open its first adult high school in St. Louis. This would be followed by three more schools next year, located in Poplar Bluff, Columbia and Springfield.

The St. Louis school would serve 236 students while the rest would have a capacity of 133 students each.

They would be structured to be compatible with the busy lives of adult students, offering free childcare and holding classes until as late as 9 p.m. Based on a similar successful program in Indiana, the average student would complete their high school education in less than two years.

“If you assume a 40 year working life, that’s almost a half million dollars in today’s money that’s available to that family,” he said. “It can literally mean the difference between living above the poverty line or below the poverty line.”

The organization has set aside $2 million for startup costs. However, it needs $3 million from the state this year to begin operating the schools in St. Louis and Poplar Bluff. An ongoing $8 million appropriation will be needed next year to operate all four schools.

Arens said the state could appropriate money from the federal Temporary Assistance for Needy Families program to fund the high schools. The money is currently included in the early budget draft being worked on in the Missouri House of Representatives. However, there are still numerous steps in the process before the budget is finalized.

The schools could help Missouri address the workforce skills shortage many employers are experiencing across the state.

“Employers are looking for good skilled employees,” Arens said. “This is a way for us to be able to create more skilled workers for employers to hire.”

In addition to receiving a high school diploma, Arens said that the new adult high schools would be designed so that students are able to complete college credit or receive an industry certification while they attend classes.

“We’ve seen such great support for this idea. With this adult high school model already being used in five states, we have an opportunity for Missouri to be a leader in giving adults a new path into the workforce,” said Ryan Stauffer, Missouri Chamber director of workforce and education policy. “I’d like to thank our General Assembly for their work to get us to this point and we’d ask that they keep adult high schools in the budget as they finalize the state’s spending plan later this spring.”

Arens said the best thing his organization can do is to give hard working Missourians an opportunity to finish their schooling and get a leg-up on a job by having an in-demand credential. He said the reward comes when graduates are hired for jobs they could have never gotten before.

“That’s what success will look like for us,” he said.