Rep. Rehder, of Sikeston, has testified in the past that her daughter has fought an addiction to prescription medication and is now sober, but a network of providers monitoring how many prescriptions she was able to fill could have prevented this addiction from taking hold.

In an effort to rein in drug abuse throughout the state, House Bill 1892, known as the Narcotics Control Act, was introduced in the House Health Insurance Committee. 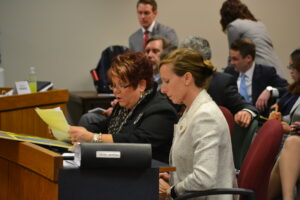 Rep. Holly Rehder and Kathi Arbini, supporter of HB 1892, testify on the bill.

“Since Kentucky’s PDMP took effect in 2012, they have seen a reduction in ‘doctor shopping’ by 52 percent,” Rep. Rehder testified. “Since Florida enacted their PDMP practices, deaths from oxycodone overdoses have dropped by 41 percent. There are statistics showing that PDMPs are absolutely working.”

The act would establish the Narcotics Control Act and would change the laws regarding the prescribing and dispensing of controlled substance. The act would require the Department of Health and Senior Services to establish and maintain a program to monitor the prescribing and dispensing of all Schedule II through Schedule IV controlled substances by all licensed professionals who prescribe or dispense these substances in Missouri. The person dispensing the drugs would then be required to electronically submit to the department information for each prescription.

“Missouri is the only state that does not have this program in place,” Brad Green, director of legislative and regulatory affairs for the Missouri Chamber, said. “If Missouri has a central prescription drug monitoring program, it would assist medical professionals in knowing whether a patient is doctor shopping or in legitimate need of a prescription as well as block criminals from other states coming to Missouri to fill multiple prescriptions. Moreover, the program will drive down the costs associated with prescription drug abuse for Missouri’s employers.”

The act would also require all submitted prescription information to be kept confidential with specified exceptions. The department would then review the information and, if there is reasonable cause to believe a violation of law or breach of professional standards may have occurred, they would then notify law enforcement.

For more information about this legislation, please contact Brad Green at bgreen@mochamber.com or by phone at 573-634-3511.