These lawmakers keep the Spirit of Enterprise alive

Each year the Missouri Chamber of Commerce and Industry honors legislators who have gone above and beyond in support of pro-jobs legislation with the Spirit of Enterprise award. On Dec. 8, 2016, four legislators were given this award during the Missouri Chamber Annual Meeting and Awards Banquet: Sen. Dave Schatz, Sen. Paul Wieland, Rep. Joe Don McGaugh and Holly Rehder.

“The Spirit of Enterprise Award recognizes legislators who have consistently shown efforts to protect the free-enterprise system in Missouri,” said Dan Mehan, Missouri Chamber president and CEO. “It is important that we highlight those lawmakers who are fighting for jobs in the Missouri General Assembly”

Sen. Dave Schatz, a Republican from Sullivan, earned the award for his work on bottom-line employer issues.

“Senator Dave Schatz is a long-time friend of the Missouri Chamber of Commerce and Industry and employers around the state,” Mehan said. “He is the go-to guy for bottom line issues such as workers’ compensation reform. A business owner himself, Schatz understands employers’ needs and fights hard to address them.” 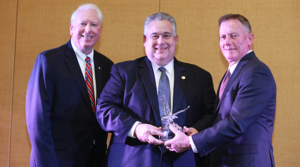 Sen. Paul Wieland, a Republican from Imperial, is a consistent friend of business, but stood out last session in his work to advance an important ports incentive bill.

“Senator Wieland provides a much-needed voice for business,” said Mehan. “Always a consistent vote for employers, he has a 100 percent vote record with the Missouri Chamber. In addition to consistent pro-business votes, Wieland also brings leadership to the Missouri Senate by sponsoring good business bills. In 2016 he championed a ports bill that will help Missouri leverage our waterways.”

Representative Joe Don McGaugh, a Republican lawmaker from Carrollton, has shown his value to Missouri employers in his time in the Missouri General Assembly. 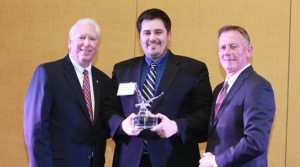 “Representative McGaugh is a leader on tort reform issues and chairs the most crucial legal reform committee in the House,” Mehan said. “He is a strong buffer between employers and trial attorneys who make their living suing businesses. We are extremely grateful for his work.”

The Missouri Chamber considers Holly Rehder one of the most courageous lawmakers in the Missouri General Assembly. Rehder is a Republican from Sikeston.

”Representative Rehder takes on the most difficult issues, from drug abuse to contentious labor issues,” Mehan said. She led efforts to pass a prescription drug monitoring bill to block abuse of illegal prescription drugs. She is also at the forefront of labor reform and has already filed a right-to-work bill for the 2017 session.”