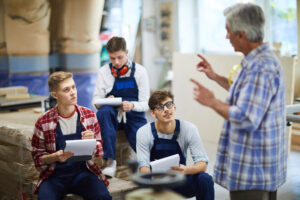 Legislation that would help Missouri students explore career opportunities in their communities continues to make progress in the General Assembly.

On April 12 a Senate Committee heard testimony on a bill that would allow Missouri school districts to give credit toward graduation when students pursue opportunities like internships, apprenticeships and other valuable out-of-the-classroom learning experiences.

House Bill 1856 is sponsored by Rep. Ben Baker, a Republican from Neosho.

“I think it will help our students get a more well-rounded understanding of the market of available careers and help businesses recruit talent.” Rep. Baker told the Senate Education Committee. “It will facilitate those positive relationships in the community.”

The idea is championed by the Missouri Chamber of Commerce and Industry and has earned broad support in Jefferson City this year.

Rep. Baker’s bill was unanimously approved in House Committee and on the floor of the House of Representatives in March. The Senate Education Committee has previously passed Senate Bill 1051, by Sen. Rick Brattin, a Republican from Harrisonville, which is similar to Rep. Baker’s House Bill 1856.

During the same April 12 hearing, the Senate Education Committee also heard testimony on House Bill 2202 which would expand access to computer science education.

The bill, sponsored by Rep. Travis Fitzwater, a Republican from Holts Summit, would require all public high schools to offer some form of computer science coursework. It also would allow high school students to use computer science credit toward graduation requirements and be equivalent to science or practical arts credit for satisfying public higher education institution admission requirements.

These policies would encourage more students to take computer science courses, a vital skillset needed for many technology jobs.

This bill has also seen significant support in the General Assembly, receiving unanimous votes in House committee and floor passage. The Senate version of this proposal, Senate Bill 659, was also previously passed by the Senate Education Committee. That bill is sponsored by Sen. Mike Cierpoit, a Republican from Lee’s Summit.