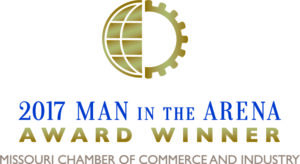 The Missouri Chamber of Commerce and Industry honored Governor Eric Greitens with the Man in the Arena award at the Missouri Business Awards on November 16 in St. Louis.

When he took his oath of office in January, Greitens was a newcomer to the field of politics, but he quickly proved himself to be a dynamic advocate for the state’s business community. By summer, he delivered a right-to-work law and legal reforms to Missouri, among other victories, which made the 2017 legislative session one of the most productive in history. Greitens is a strong supporter of the goals of Missouri 2030, the Missouri Chamber’s strategic 15-year plan to make the state a global economic leader. Thanks to his actions, there has been substantial progress made toward putting Missouri on the map for business.

The Man in the Arena award was created to give special recognition to a lawmaker who has gone above and beyond the call of duty to protect Missouri employers. It is named after a famous quote by Theodore Roosevelt: “The credit belongs to the man who is actually in the arena, whose face is marred by dust and sweat and blood…who at the best knows in the end the triumph of high achievement, and who at the worst, if he fails, at least fails while daring greatly, so that his place shall never be with those cold and timid souls who neither know victory nor defeat.”

As he was returning from an international trade mission, the governor could not accept this award in person, but his acceptance message can be viewed below.