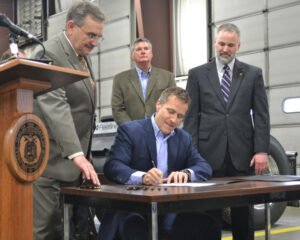 A mid-Missouri business served as the backdrop today as Gov. Greitens signed an important bill that helps balance Missouri courts. Gov. Greitens made good on campaign promises by signing House Bill 153 into law at Midland Transports, a distribution company in Jefferson City. The legislation raises Missouri’s expert witness standards to align with much of the rest of the nation—an important step as the legislature works to improve Missouri’s legal climate.

“Missouri courts have earned a national reputation for being biased against Missouri employers,” said Dan Mehan, Missouri Chamber president and CEO. “One reason is that current standar

ds allow junk evidence into proceedings to sway juries against employers. Forty other states have addressed this problem and it’s time Missouri does the same.”

House Bill 153 will provide the same high standards for trial evidence that are currently required in federal courts and 40 other states. Called the Daubert standard, it ensures that only evidence deemed relevant, reliable and provided by qualified individuals will be admitted as expert testimony. Expert witnesses are very influential in shaping the outcome of cases. Under the Daubert standard, the judge serves a critical role making sure an expert witness meets certain basic criteria.

“Gov. Greitens campaigned upon bringing justice back to our courts and today he has delivered,” said Mehan. “Several other common-sense tort reform measures are also well-positioned for passage this legislative session. We are working hard to get those measures across the finish line and we appreciate Gov. Greitens’ leadership.”