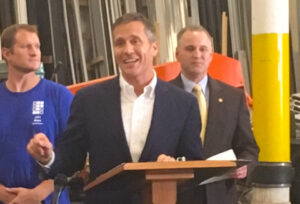 One of the litigation reforms signed today is Senate Bill 31, which will allow courts to consider whether plaintiff’s losses have been covered or reduced through other sources such as through insurance, workers’ compensation or adjusted hospital billing. The bill was sponsored by Rep. Ed Emery, a Republican from Lamar. It will stop plaintiffs from using inflated damages to trigger windfall-sized awards.

“The frivolous lawsuit game is over in Missouri. In recent years, attorneys have hit the jackpot by suing employers and exploiting the flaws in Missouri’s judicial system. This situation led to Missouri being labeled a ‘judicial hellhole’ with a legal climate ranking among the worst in the nation,” said Daniel P. Mehan, President and CEO of the Missouri Chamber of Commerce and Industry. “The Missouri Chamber spent years advocating for reforms to fix this situation. Thanks to the leadership of Gov. Eric Greitens and the hard work of our Missouri General Assembly, the reforms we needed are now law. The bills signed today, in addition the previously-signed expert witness and employment law reforms, instill balance and fairness in our state’s civil justice system. These reforms send a powerful message that Missouri is open for business. It’s time to get to work.”

In addition, the governor signed House Bill 93 to improve access to the popular Missouri Works Training Program. The bill also establishes four adult high schools in the state, giving hundreds of thousands of Missourians a second chance at attaining a high school diploma. House Bill 93 is sponsored by Rep. Jeanie Lauer, a Republican from Blue Springs.

“The Missouri Works Training Program is a popular and effective effort. We are glad to see it expanded. In addition, a high school diploma is almost a prerequisite for work in Missouri. With workforce challenges remaining a top concern of Missouri employers, it’s critical that we are doing everything we can to empower our citizens to get themselves ready for work,” said Mehan. “We thank Gov. Greitens for signing House Bill 93 and the legislature for making workforce a priority.”