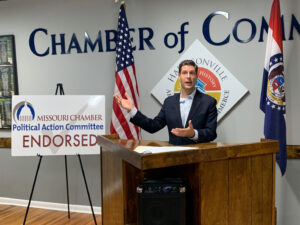 With a focus on growing jobs and deep understanding of the issues facing Missouri’s economy, Jack Bondon has earned the endorsement of the Missouri Chamber PAC.

With this endorsement, the Missouri Chamber PAC is urging residents of Senate District 31 to vote for Jack Bondon in the August 4 primary election.

“The Missouri Chamber of Commerce and Industry is in the halls of the capitol every day during the legislative session. I can tell you there is a stark difference between lawmakers who understand what it takes to grow our economy and those who are focused on other issues,” said Daniel P. Mehan, Missouri Chamber president and CEO. “To create jobs and build a more prosperous Missouri, we need people like Jack Bondon serving in the General Assembly. In the Senate District 31 primary election, the Missouri Chamber PAC feels the choice is clear. If you care about Missouri’s economy, please vote for Jack Bondon.”

He currently chairs the House Financial Institutions Committee and has been at the forefront of efforts to maintain and modernize the state’s aging utility infrastructure. He is also a leading advocate for the state’s vital health care industry and is a strong supporter of efforts to improve Missouri’s workforce and reform our state’s job-killing legal climate.

The Missouri Chamber announced this endorsement on Thursday, July 16, at the Harrisonville Chamber of Commerce in Harrisonville, Mo.