The Senate Jobs committee this week, members were informed that the economic performance in rural Missouri ranks well behind the urban parts of the state.

One important factor behind this trend is that people in rural Missouri often have a very difficult time finding the capital needed to turn their ideas into reality. 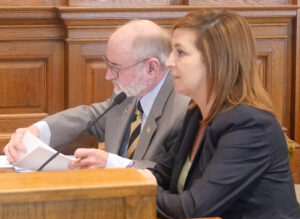 A bill in the Missouri Senate, Senate Bill 885 sponsored by Republican Sen. Brian Munzlinger, is seeking to change this by creating a state-run system to channel investment dollars to rural communities. A similar bill was heard in the house, House Bill 1927 by Rep. Craig Redmond. Both bills are known as the Show Me Rural Jobs Act.

The Show Me Rural Jobs Act is similar to the New Market Tax Credit program, set to expire in 2018. However, the Show Me Rural Jobs Act would be administered by the Missouri Department of Agriculture and retargets capital investment specifically toward rural areas, focusing on investments in manufacturing, agriculture technology, plant sciences and high tech sectors. By restructuring the focus and redirecting the cap, the state will see a net gain of $5 million per year.

Since 2004, less than four percent of all capital and 1.7 percent of investments have been in rural areas. This bill, which the Missouri Chamber has championed, would address this issue. Tracy King, vice president of governmental affairs, testified that the rural jobs act is in line with the goals of the Missouri 2030 strategic plan unveiled in 2015.

“The Missouri Chamber has spent the last year and a half working on a strategic plan with Gallup and Ted Abernathy looking at trends in Missouri and the nation,” King said. “One trend we’ve been watching is urbanization which is a global, national and regional trend. Missouri’s population is 43 percent rural but there is a lack of access to capital and investment in job creation in those rural areas. This bill is an attempt to bring that access to capital to small business in rural areas, something we must do to turn the urbanization trend around for Missouri.”

For more information you can visit ruraljobsformo.com or contact King at tking@mochamber.com or by phone at 573.634.3511.