On Oct. 5, students in Missouri and around the nation got to explore industrial careers on-site as factories opened their doors to showcase opportunities in the world of manufacturing.

The Missouri Chamber, local chambers and community colleges across the state collaborated with more than 150 manufacturers to host rallies, exhibitions and tours, drawing more than 7,000 students.

Manufacturing is one of Missouri’s biggest industries, with manufactured products comprising 13.2 percent of the state’s total GDP. According to the National Association of Manufacturers (NAM), for every $1 spent in manufacturing, another $1.89 is added to the economy – the highest multiplier effect of any economic sector.

Seyer Industries is a third-generation family company in St. Peters that makes military and commercial aerospace parts. CEO Chris Seyer said MFG Day is a great way to demonstrate what manufacturing is really like.

“Young kids are often in front of other professions such as doctors and engineers, but rarely do they get to see how things are made,” said Seyer. “So that’s why it’s important for us to just introduce high school and middle school kids to manufacturing – that it’s out there, it’s in their backyard and is a viable career option.”

The factory tours help to dispel misconceptions that modern manufacturing is dark or dirty. Seyer said one of the comments he hears most often is that the floor of their plant is clean enough to eat on.

“People come to work and it’s not dingy. It’s not depressing. It’s actually an upbeat environment to work in,” said Seyer.

NAM reports that nearly 3.5 million manufacturing jobs will be needed over the next decade. However, two million of those are predicted to go unfilled due to the skills gap in the workforce.

Manufacturers hope to spread awareness that the industry provides high-paying jobs without extensive education requirements. With a trade school certification or two-year degree, Seyer said, graduates in areas like machining, welding or CnC programming can start making $50,000 a year straight out of school.

“Not only will you make good money at a very young age, you won’t have the debt associated with a four-year degree,” said Seyer.

“Not everybody can go to college, or not everybody wants to get a four-year degree,” said Richter, the chief operating officer at Newco. Newco produces commercial coffee brewing equipment and accessories.

Richter also pointed out that many manufacturers will help train employees in-house.

“There are trades and skills that we will train here, and so we’re just trying to bring that awareness and trying to increase our opportunities for good employees for the future,” he said.

A past NAM study showed that nearly 90 percent of the students who attended a MFG Day event said they became more aware of manufacturing jobs in their communities. The experience left 64 percent of them feeling more motivated to pursue a manufacturing career.

Frankie Bon, a senior at Fort Zumwalt East High School, said he might pursue a career as a CnC machinist.

“I’m kind of interested in doing that and didn’t know that you could do it at so many places. Pretty much all of them had CnC machinists,” he said.

Alison Taylor is a junior at Fort Zumwalt.

“I didn’t know much about manufacturing. All I knew was, you know, just the fact that a lot of little pieces go together,” Taylor said. “But today, I actually got to see how many people and machines actually go into the whole process.”

She said she was impressed by how high-tech the machines were.

“It would be a very awesome job to have and I saw a lot of jobs in there that I would like to try,” said Taylor.

Learn more at mochamber.com/mfgday, or watch highlights below. 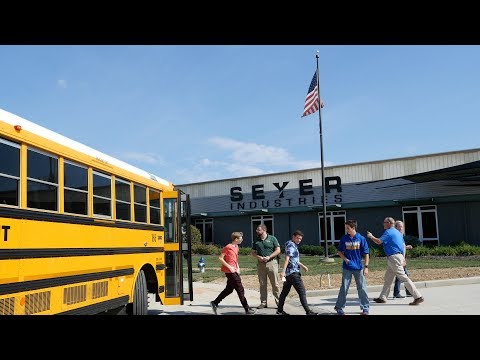