The Missouri Chamber of Commerce and Industry presented the legislative Man in the Arena Award to Senator-elect Caleb Rowden at the Missouri Chamber of Commerce and Industry Annual Meeting and Awards Banquet, which was held at Big Cedar Lodge, Ridgedale, Missouri, on Dec. 8, 2016. This award was created to give special recognition to one lawmaker who has gone above and beyond the call of duty to protect Missouri employers. It is named after a famous quote by Theodore Roosevelt: 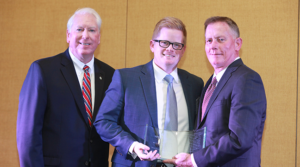 Rowden’s unwavering support of pro-jobs policy and his courage to take tough positions on controversial legislation is why the Missouri Chamber honored the lawmaker with this honor.

“Time and time again, Rowden has shown his skill and strength as a lawmaker,” said Missouri Chamber President and CEO Dan Mehan. “As the head of the House Economic Development Committee, he was in the drivers seat for many pro-jobs legislative initiatives and he used that position well to advance positive economic development policy. Rowden is not afraid to also stand up when needed to block bad ideas. Not all lawmakers have that type of courage.”

The Missouri Chamber actively supported Rowden in his Senate election.

“Rowden has consistently worked alongside the Missouri Chamber during his time in the Missouri House and we look forward to continuing our work together as he heads to the Senate,” Mehan said.

The urgent business case for a statewide approach to crime

The following op-ed was originally published in the St. Louis Business Journal. By Daniel P. Mehan “We were taking fire on the fourth floor.” I’ll never forget standing with that […]