Continuing a concerning theme of government overreach, Senate lawmakers this week held a hearing on a bill seeking to influence private business policies relating to firearms. The Missouri Chamber remains opposed to federal or state-led efforts to trample on our system of free enterprise, including the concerning trend of Missouri lawmakers seeking to use state law to influence or dictate employer policies.

On March 29, the Senate Insurance and Banking Committee heard testimony on Senate Bill 1048 which would essentially bar public entities from entering a contract with a private business that “discriminates against a firearm entity or firearm trade association.”

Much of the testimony during the hearing centered on how the legislation would impact banks.

Sen. Rick Brattin, a Republican from Harrisonville, said his bill “would prohibit taxpayers from engaging in commerce with these banks, obtaining loans — and everything under the sun — if they have a policy that is discriminatory against our second amendment.”

Sen. Brattin said the reason for his bill stems from a now-defunct effort by the Obama Administration to scrutinize relationships between banks and firearms manufacturers.

As drafted, the legislation would likely go far beyond just banks, requiring all private companies that do business with a Missouri public entity to provide written verification that they do not discriminate against firearms companies.

The Missouri Chamber of Commerce and Industry testified against the bill alongside other industry groups.

As some lawmakers have focused this year on increasing regulation on private industry, the Missouri Chamber has struck a consistent message: Let business decide.

Regardless of the intentions behind the legislation, the Missouri Chamber will always stand up against laws that seek to override an employer’s ability to make the right decisions for their business. 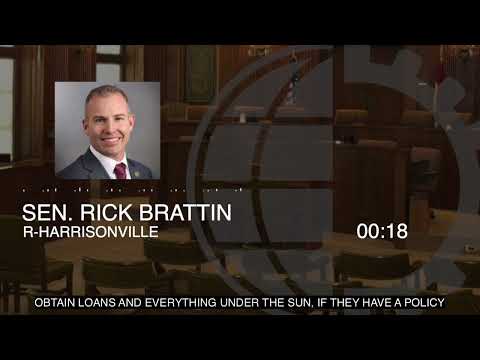