This week Lieutenant Governor Mike Parson launched Buy Missouri, a new program to recognize and promote products made within Missouri’s borders while strengthening the state’s economy. Over two days Parson took a statewide tour to kick off the program, making appearances at ten Missouri businesses and local chambers of commerce.

Parson is confident the program will be a win-win for both Missouri manufacturers and consumers.

“Eighty percent of the new jobs created in this state are created by existing businesses in the State of Missouri,” Parson said at Shakespeare’s Pizza in Columbia on Oct. 25. “We need to make sure to take care of our own businesses in the state. The way we do that is by me and you working together with other agencies and you as consumers to help one another, educate one another on what those products are.”

Several partners are collaborating with Buy Missouri, including the Missouri Chamber, local chambers and other business organizations and state agencies.

Parson said plans include organizing a trade show to showcase Missouri businesses, as well as working with retailers to label Missouri-made products in stores to raise consumer awareness.

“Whether it’s barbeque sauce, whether it’s hand cleaner, whether it’s pet food, whatever the product is, we want you to know at least it was made in Missouri and you have a choice,” said Parson. “And that’s what Buy Missouri’s going to be all about: making choices.” 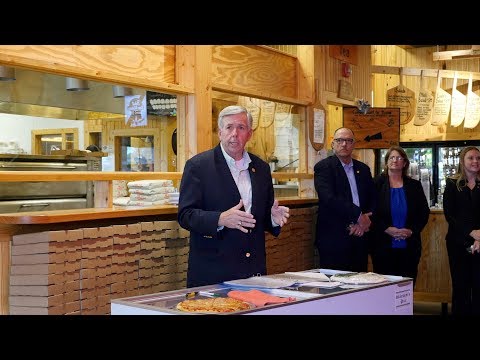