Bush met with Missouri legislators and spoke with reporters about the need to update the educational system. 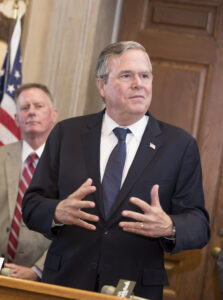 “Think about all of the great institutions in our society that have changed and adapted when the circumstances changed,” he said. “And yet, our public education system—in spite of really dedicated public school teachers and people that really have a heart for kids—hasn’t changed. Here in Missouri, you now have a chance to bring your system of governance around the children that will define the future of this state into the 21st Century.”

Bush championed education reform during his two terms as Florida governor. After leaving office, Bush has continued this work, establishing his Foundation for Excellence in Education to help other states reform their education systems.

The current push for education reform follows the publication of the Missouri 2030 Gallup survey, commissioned by the Missouri Chamber, in which only 15 percent of the state’s business leaders said Missouri’s high schools are preparing students for the workforce. Likewise, only 44 percent of Missouri business leaders say they are satisfied with the availability of skilled workers.

“It’s encouraging to see the Missouri General Assembly listening to the business community and making real progress toward education reform this year,” said Daniel P. Mehan, Missouri Chamber president and CEO. “We are excited to hear what Gov. Jeb Bush brings to the discussion and hope his visit highlights both the positive steps being made in this area and the need to do much more to ensure Missouri’s workforce can compete in the global economy.”

More on the efforts to bring education reform to Missouri: