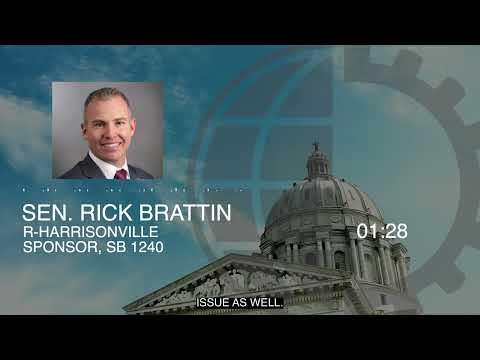 “It’s a pretty rampant situation. My daughter — she’s my second oldest daughter, she’s 18 — works at a retail store. And she says it’s just mind blowing to see [how] people will come into these stores, [take] literally armfuls of [merchandise] and walk out of the store knowing full well that nobody’s going to stop them from doing so,” said Brattin. “It’s so bad in the store that she’s in that the shelves are literally bare in the store and people that want to purchase items, can’t even purchase items because they’ve been stolen.”

This legislation would create an Organized Retail Crime Task Force, the Republican from Harrisonville explained at his bill’s Senate committee hearing on April 26. The force would be comprised of at least one full-time prosecutor, one paralegal, one support staff person, two investigators and four peace officers.

The Missouri Chamber testified in favor.

“We appreciate that this brings businesses together with law enforcement to combat theft in a holistic manner,” said Kara Corches, Missouri Chamber vice president of governmental affairs.

“Counterfeits and retail theft are a growing global problem, and it impacts not just online commerce, but physical commerce as well…Organized retail crime task forces in several states have a proven track record. They bring law enforcement, retailers and brands together to stop bad actors and hold them accountable,” said Dempsey.

For more information regarding this legislation, contact Corches at kcorches@mochamberdreampress.stage.site or (573) 634-3511.