Bill would protect businesses from lawsuits over unpreventable crimes

It’s a nightmare for any business leader to see their company turned into a crime scene. However, many Missouri business leaders aren’t aware that in the wake of a tragic event they are actually in danger of being held liable for these criminal acts.

“Existing law is too harsh on Missouri businesses, mandating they must bear responsibility for preventing crimes that are often unpredictable. As a result, businesses avoid high-crime areas, which only hurts those who live in these neighborhoods. The act aims to clarify the state’s common law, which has been muddied in this area from confusing rulings by Missouri appellate courts,” wrote Hoskins.

SB 608 states “a business only has the duty to guard against criminal or harmful acts occurring on the business’s premises when the business knows or has reason to know that such acts are being committed or about to be committed by an identifiable person and such acts pose an imminent probability of injury to another identifiable person, and there is sufficient time to prevent such injury.”

Under the bill, a business would not be liable if it had implemented reasonable security measures or if the claimant was a trespasser, under the influence of alcohol or drugs, or committing or attempting to commit a felony.

The Missouri Chamber of Commerce and Industry is a strong supporter of the bill.

“Once settled areas of the law are left to be misinterpreted. And if they are not spelled out explicitly, businesses will continue to be held liable for acts by criminals that are out of their control,” said Justin Arnold, general counsel for the Missouri Chamber. “And it could mean that our small businesses would have to somehow have, for example, 24/7 surveillance, or armed guards, if that’s the road we’re going down. And that’s not feasible to many businesses in the state.”

You can read here about a currently ongoing Missouri Supreme Court case that illustrates why legislation like this is needed. 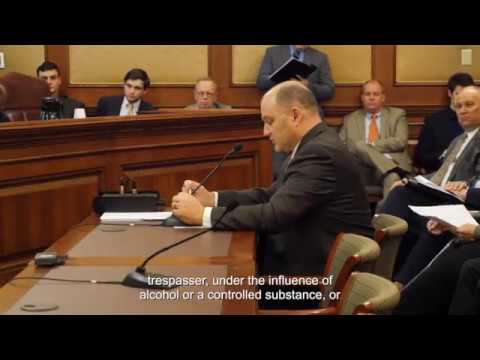