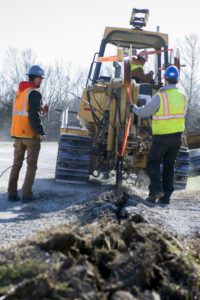 Missouri is ranked 42nd nationally in access to broadband internet, according to the Missouri 2030 Dashboard. With the understanding that broadband is a critical resource for growing businesses, the Missouri legislature is considering a bill to help Missouri retain any federal dollars for building out rural broadband if a particular provider is unable to fulfill its commitment to utilize those funds.

“This statute will enable [the Department of Economic Development] to legally seek to have any funds that would otherwise be returned to the federal government to be retained in Missouri and awarded to other eligible qualified Missouri broadband providers according to existing standards in our process,” said bill sponsor Rep. Louis Riggs (R-Hannibal) at a committee hearing for the bill on April 28.

Riggs, a 2019 Missouri Chamber Business Champion, said that with the millions of dollars Missouri broadband providers have been awarded from recent FCC and USDA Rural Development auctions that Missouri must act to keep that funding.

“We need to keep that funding in Missouri in order to bring all of Missouri’s economy into the 21st century, including, of course, access for students, precision agriculture to improve productivity for our farmers, telemedicine resources to better deliver medical services which we have seen acute need of here in the last several weeks,” Riggs said.

This bill is even more important because of additional federal funding that is also likely on the horizon, Riggs said, with the potential for a federal infrastructure bill that would likely contain broadband funds, and the FCC announcing plans for a new round of auctions that would release $20 billion nationwide beginning in October.

According to the Missouri 2030 Dashboard, more than 1.2 million Missourians do not have access to high-speed internet.

Though expanding broadband has been an ongoing priority of the Missouri Chamber for years, the COVID-19 crisis made the need for this even more clear. In addition to supporting rural businesses, students and their families in normal times, expanding reliable internet access will help Missouri be better prepared for future crises that may necessitate mass shifts to remote learning and working. This is a long-term action item in the Missouri Chamber’s recently-released Uniting For Recovery COVID-19 Economic Response Agenda.

The legislation is House Bill 1768.