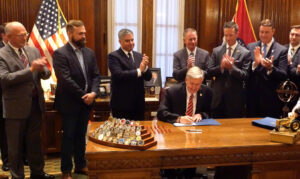 On July 10, Gov. Mike Parson signed Senate Bill 68 into law, a piece of legislation that will bolster Missouri’s economic development and workforce programs.

Senate Bill 68 was sponsored by Sen. Lincoln Hough, a Republican from Springfield. The provisions in the bill were recommendations of the Missouri Chamber Foundation’s Workforce2030 Report released in 2018, and the Missouri Chamber’s 2019 Legislative Agenda. The Missouri Chamber advocated strongly for the bill’s passage during the legislative session, resulting in a fourfold win for our state’s employers and employees.

“Senate Bill 68 is a bold vision addressing two of the biggest issues facing our state’s entire business community: workforce preparation and economic competitiveness. This law will benefit employers of all sizes in Missouri — from empowering thousands of Missourians to equip themselves with in-demand skills, to giving job creators better access to critical workforce resources, to boosting the effectiveness of our state’s economic development tools,” said Daniel P. Mehan, president and CEO of the Missouri Chamber. “Missouri owes a tremendous amount of gratitude to the strong leadership of Gov. Parson, Sen. Hough and the many legislators who supported this bill and fought for its passage.”

The newly signed legislation will: