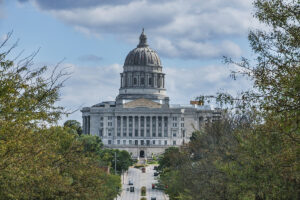 Missouri’s business community has unfinished business to resolve in the 2017 Legislative Session. After nearly a decade of vetoes of labor, civil justice, unemployment insurance and workers’ compensation reforms, these important issues are poised for passage under the new Greitens administration. Stalemates in economic development, workforce, and infrastructure could be broken as leadership in the Missouri Senate, House, and governor’s office work together to secure positive change. These goals are highlighted in the Missouri Chamber of Commerce and Industry’s 2017 Legislative Agenda .

“We believe 2017 could be a watershed year for Missouri job creators,” said Dan Mehan, Missouri Chamber president and CEO. “The election gave us the opportunity to put the team on the field that will enact the reforms we need to be competitive. We did and it’s time.”

Concern about economic trends that showed Missouri lagging behind other states in the nation prompted the Missouri Chamber to develop a 15-year strategic plan, Missouri 2030, to reposition the state as an economic leader. According to the Bureau of Labor Statistics, from 2005 to 2015, Missouri’s employment growth was slower than that of 40 other states. Missouri’s gross domestic product (GDP) growth lagged behind 35 other states during that same time.

The Missouri Chamber hired a leading economic development strategist and Gallup to find out what steps Missouri employers needed to take to reverse these trends, interviewing more than 1,000 Missouri CEOs and business owners.

“The findings from this research—gathered from Missouri’s economic front line—is the foundation of our legislative agenda,” said Mehan. “It is based on data and hard facts – although some of those facts are not flattering. But rather than continue to ignore the economic trends, we are going to change them. The political leadership we now have in Jefferson City agrees.”

The Missouri Chamber’s research revealed the need for strong labor reforms. In our Gallup survey of more than 1,000 Missouri CEOs, job creators revealed that becoming a right-to-work state would help make Missouri more competitive. Gallup also interviewed site selectors from around the nation.

“During interviews of site selectors, Gallup was told that Missouri is operating at only 60 percent of its capacity without right-to-work,” Mehan said. “That means we are losing 40 percent of the opportunities for new jobs coming to Missouri.”

Right-to-work is not just an economic issue. It is also a matter of fairness.

“This issue is framed as ‘business v. labor,’ but that is not the case,” Mehan said. “Frankly, it is an issue between big labor bosses and Missouri employees. Bottom line, employees should be given the opportunity to choose whether or not they want to be part of a union. Right-to-work gives them that right.”

Right-to-work legislation was passed in the 2015 Legislative Session but was vetoed by Gov. Nixon.

Paycheck protection is another labor reform advocated by the Missouri Chamber. Paycheck Protection prohibits labor organizations from using employee dues for political contribution without permission, a basic right every worker should have.

The Missouri Chamber will also work to reform prevailing wage laws in Missouri. The policy mandates an arbitrary level of wage-setting on public projects.

“That mandate is costing taxpayers far greater than the market dictates,” said Mehan. “In some areas of the state, it could nearly double the project cost on taxpayer-funded projects compared to costs of other local construction projects. It’s the difference between a project starting or remaining on the shelf.”

Missouri’s legal climate is one of Missouri’s business community’s deepest concerns. According to a Missouri Chamber-commissioned Gallup survey of more than 1,000 Missouri CEOs and business owners, less than one in four Missouri employers are satisfied with the state’s litigation climate. St. Louis was recently highlighted by the American Tort Reform Association (ATRA) as the nation’s worst “judicial hellhole” because of Missouri’s lax  venue laws, expert witness standards and the wave of frivolous litigation that has flooded St. Louis courts as a result.

“Missouri courts have eroded the law to the point that Missouri holds the distinction of some of the lowest standards for discrimination lawsuits in the nation,” Mehan said.

Simply put, the legislation would have made Missouri’s employment law mirror that of the federal Civil Rights Act, like the majority of states in our nation. This legislation would bring Missouri law back in line with other states, reduce the frequency of frivolous lawsuits, and ensure more timely and fair resolution for legitimate discrimination cases.

“Make no mistake, discrimination is wrong,” Mehan said. “But it is also unfair to subject Missouri employers to a constant barrage of trial lawyers filing outlandish lawsuits hoping for a big payoff.”

Missouri lawmakers must also work to eliminate the joint and several liability standard and reform venue law, which incentivizes lawyers to drag businesses into costly lawsuits.

In addition, the Missouri Chamber seeks reforms that ensure that only qualified professionals are allowed to testify as expert witnesses in cases. Another commonsense piece of legislation would reform Missouri’s collateral source standard and allow juries the full scope of information in determining an injured worker’s award, including the amount the worker received in medical insurance, workers’ compensation, or other third party sources to offset the cost of a treatment. Both these reforms were passed in the 2016 session but were vetoed by Gov. Nixon.

“These are not outlandish changes, rather reasonable reforms to return equity to our state’s legal system and improve our national reputation. We want to return balance to our court system, no more and no less,” Mehan said.

Perhaps no other issue affects Missouri’s workforce and Missouri employers’ ability to compete as much as education and workforce development policy. Gallup clearly revealed the need to invest in Missouri’s workforce. According to Gallup, only 44 percent of Missouri’s business owners are satisfied with the state’s availability of workers. Employers cited weaknesses in the state’s ability to prepare, attract, and retain workers.

“If we fail in education, no other economic development measures really matter,” Mehan said. “Missouri employers, like employers nationwide, struggle to find the right workers to fill open jobs. Much can be done to close that gap, but there is not a quick or easy fix.”

The Missouri Chamber will advocate for a full line-up of education reforms, many focusing on ensuring that every child has access to a quality education that will adequately prepare them to enter the workforce. The chamber will support policies to increase STEM and career and technical education, work-based learning programs, and expand school choice opportunities.

The availability of responsive and flexible training is another top concern of Missouri employers. Addressing this need will be a leading priority of the Missouri Chamber in 2017. During the interim, the Missouri Chamber has been working with House and Senate leadership and community leaders to create a new, aggressive approach to workforce development.

Extreme court decisions over the last decade have eroded the balance of Missouri’s workers’ compensation system.

Reforming Missouri’s workers’ compensation system requires a careful balance to ensure injured workers are protected without causing harm to the state’s business community and job creation efforts, but that’s an ongoing effort as the state’s courts provide new, extreme decisions every year. In 2017, the Missouri Chamber will focus on one of the most recent judicial attacks on the system—Templemire v. W&M Welding.  This decision significantly changes the workers’ compensation system giving virtually anyone who has had a work comp claim in the past the opportunity to make a workplace discrimination claim.

“The system, which was designed to provide an exclusive remedy so that workers could be made whole quickly and fairly, continues to be chipped away by the courts,” said Mehan. “Cases such as Templemire v. W&M Welding are undoing 30 years of established case law. We must ensure that injured workers are protected without causing harm to the state’s job creators.”

Another piece of unfinished business is unemployment insurance reform. Legislation passed in 2015 to help shore up Missouri’s financially unstable unemployment insurance trust fund was vetoed by Gov. Nixon. The veto was overridden, but the process by which the override vote was taken was ruled unconstitutional by the Missouri Supreme Court, and the legislation was thrown out.

The vetoed bill tied the number of weeks available for unemployment benefits to the unemployment rate. The Missouri Chamber will pursue a similar bill in the 2017 Session.

“Missouri’s unemployment trust fund has had to borrow millions in funds from the federal government in order to cover claims in recent years. That has cost employers millions in interest to pay back the fund and jeopardizes this important safety net for unemployed workers,” said Mehan. “This is one common-sense step we can take to protect this important system.”

Gallup’s research revealed that basic infrastructure, such as roads and bridges, is a prevalent concern of employers, especially industries that depend on roads and airports for the movement of goods. According to Gallup, only 37 percent of Missouri employers are satisfied with Missouri’s basic infrastructure.

One site selector interviewed by Gallup said, “Missouri has so many strengths by default in its central location and needs to take better advantage of these.” Gallup concluded that leveraging Missouri’s location through strategic policymaking and investment in infrastructure would be a smart move for the state.

“Infrastructure improvements, especially roads and bridges, is critical to economic development and many states are grappling with the challenge,” Mehan said. “There is no clear path, and fund-raising initiatives continue to be met with opposition in this state. But that is not a reason to shy away from the issue. Instead, we need to double our efforts. Other states are doing innovative infrastructure advancements, and we cannot squander these assets because we are afraid of hard work.”

That goes for energy, water, and broadband infrastructure as well. The future prosperity of our state is tied to our ability to support the maintenance and expansion of vital infrastructure. The Missouri Chamber will be heavily involved in these efforts in 2017.

Access to capital will be the focus of economic development legislative efforts in 2017. The Missouri Chamber will advocate for programs that will provide the funding and resources employers need to grow in our state. Specifically, the Missouri Chamber will support expanded funding to the Missouri Technology Corporation (MTC), a public-private partnership created by the Missouri General Assembly to promote entrepreneurship and foster the growth of new and emerging high-tech companies.