For most businesses, their state’s legal climate is rarely an acute concern — until they are sued.

Getting sued is an especially big problem for businesses in Missouri, which happens to have one of the nation’s worst legal climates. And even though our poor legal climate isn’t a day- to-day worry for many Missouri companies, every single Missourian is being harmed by our current system.

Recent studies confirm that trial attorneys have a distinct advantage when suing a business in Missouri.

Our state’s legal climate currently ranks 44th in the nation according to the U.S. Chamber Institute for Legal Reform.

“Missouri is still a plaintiffs’ lawyer’s favorite because of its jaw-dropping verdicts, ridiculous class action lawsuits, and courts that welcome out-of-state plaintiffs,” said Harold Kim, chief operating officer of the Institute for Legal Reform. “Missouri has made some improvements to reduce forum shopping and other abuses, but there is still much work to be done.”

It’s true that Missouri has improved in recent years. The state was ranked 49th in the nation two years ago. The progress comes as the Missouri Chamber has advocated in the state capitol for critical reforms like 2019’s Senate Bill 7, which fixed a longstanding venue and joinder issue and helped restrict the flow of out-of-state cases into Missouri courtrooms.

But the work is far from over.

“Missouri has been making strong progress in recent years to become an attractive place for job growth and business investment. But ranking 44th in the nation is a devastating blow to our work to make Missouri an economic leader,” said Daniel P. Mehan, Missouri Chamber president and CEO. “For far too long, trial attorneys have abused the system for profit and used their political influence in Jefferson City to derail our reform efforts. That must end now. We can no longer be a state that’s doing everything it can to improve our economy, only to have our efforts stymied by trial attorneys who want to siphon money into the massive lawsuit industry they’ve built in Missouri on the backs of our job creators and workers. We are calling on Missouri lawmakers to make this their focus in 2020. There is nothing more important to our state’s economic future than to finally bring fairness to our state’s court system.”

The Institute for Legal Reform bases its rankings on the real-life experiences of legal professionals working in Missouri compared to other states.

“Anyone who thinks Missouri deserves a pat on the back for improving to 44th in the nation is deeply mistaken about the damage our legal climate continues to have on our economy. This is an embarrassment for our state and it must be fixed as soon as possible,” said Mehan.

The state’s legal climate problems are also well documented by the American Tort Reform Association, which regularly places Missouri and St. Louis near the top of its annual list of Judicial Hellholes. 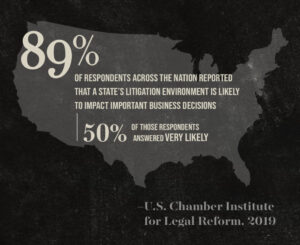 In addition, a 2018 American Tort Reform Association study showed that Missourians need only to turn on their televisions to find another glaring symptom of the out-of-control litigation climate here.

Commercial breaks in Missouri are flooded with legal advertisements. The American Tort Reform Association found that television viewers in Missouri see more legal ads than almost anywhere else in the country.

In the St. Louis market, trial lawyers spent $860,000 on nearly 14,000 television ads during a three-month period in 2018. That amounts to 153 ads soliciting legal claims or advertising legal services every single day. Things only get worse in Kansas City where there were almost twice as many televised legal services ads during the same time period, averaging nearly 10 ads each hour.

Trial lawyers advertise in Missouri because Missouri is a great place to sue people. It’s worth it to spend millions of dollars on television time because they recoup those costs, and much more, by dragging businesses and individuals into our state’s unfair courtrooms.

But even for businesses that manage to avoid being pulled into court, there are still major costs to bear because of our state’s legal climate.

A 2018 Citizens Against Lawsuit Abuse study found that Missouri’s legal climate costs the state $1.6 billion each year. In addition, the situation depresses our state output by $2.5 billion and has killed more than 26,500 jobs. Furthermore, the legal climate exacerbates the state’s tight budget by reducing revenues by $127.1 million. Local governments are also feeling the pinch, as the flawed judicial system costs them $108.5 million in annual revenues.

Likewise, the Institute for Legal Reform found that every Missouri household is losing, on average, $3,099 per year due to our litigation system.

What’s even more troubling is the untold impact that our litigation climate is having on our ability to compete for jobs and business development. The U.S. Chamber’s study found that 89 percent of business leaders said that a state’ litigation environment is likely to impact important business decisions, including where to locate or do business.

It’s past time that Missouri ends these schemes and puts a stop to our reputation for job-crushing lawsuits.