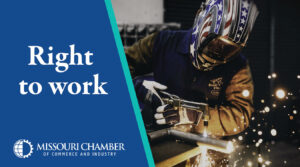 Wasting no time, the Missouri General Assembly is taking action on right-to work legislation. The Missouri House Committee on Economic Development today heard five bills that would protect Missouri workers from being forced to join and financially support unions, making Missouri a right-to-work state. A Senate committee is expected to hear similar legislation on January 11.

“It’s simple economics. If you make it more attractive for employers to provide jobs, you will see an increase in opportunities and economic growth,” said Dan Mehan, Missouri Chamber president and CEO. “Data proves that right-to-work policy increases job opportunities and prosperity in the states that enjoy this freedom.”

Data from the U.S. Bureau of Economic Analysis also debunks claims that right-to-work policy harms wages. Wage growth in both right-to-work and non-right-to-work states was exactly the same during the last decade, increasing by 7.7 percent from 2005-2015.

“Like any other business, unions should have to earn member support rather than relying on a government mandate to keep them in existence,” Mehan said. “Employees should be given the opportunity to choose whether or not they want to be part of a union and this legislation gives them that right. Right-to-work does not eliminate unions, but it does make unions more accountable to their members and prospective members.”

The House Bills are:

The Senate Bills are: