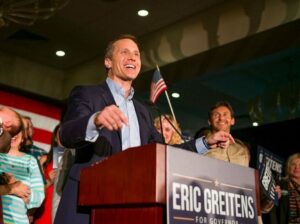 “Missourians have made a bold, thrilling choice in electing Eric Greitens to serve as governor. I’d like to be among the first to congratulate Eric Greitens. I’d also like to thank him for taking on the challenging task of leading our state and guiding us on a new path toward a better Missouri.

The Missouri Chamber of Commerce and Industry was among the earliest supporters of Governor-elect Greitens. In him, we saw a uniquely qualified leader with a small-business mindset and an unparalleled resume. We saw someone who could serve as an inspirational, uniting governor unlike any in memory.

It’s clear that Missouri voters agreed with us. Now, their votes will be rewarded.

We can expect Governor-elect Greitens to act quickly on some of the biggest problems facing our state and to quickly clear some long-standing roadblocks that have been impeding our growth. Bringing right-to-work protections to Missouri and ensuring our state courts are fair to all parties are just a few of the first steps he has proposed.

We also expect Governor-elect Greitens will bring the energy needed to address problems in our state’s transportation infrastructure as well as ensure we are doing everything possible to prepare our Missouri students for the workforce. These actions align with the Missouri Chamber’s Missouri 2030 plan, a plan our new governor has studied and understands.

On behalf of our state’s business community, I’d like to again congratulate Eric Greitens, our new governor. We look forward to working with him in 2017 and many years forward.”

-Daniel P. Mehan, President and CEO of the Missouri Chamber of Commerce and Industry