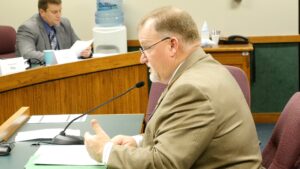 Reversing anti-employer court rulings is a common theme in the 2017 Legislative Session. Lawmakers took another step to address a damaging decision by the Missouri Supreme Court this week, as a House Committee approved Senate Bill 113. The bill is sponsored by Sen. Dave Schatz, a Republican from Sullivan.

Under Senate Bill 113, Missouri employers could not use workers’ compensation claims as motivation to fire or otherwise discriminate against injured employees. The bill was necessitated by a 2014 Missouri Supreme Court decision. The court’s ruling in Templemire v. W&M Welding broadened the state’s standard. It opened the door to additional lawsuits due to the lower “contributing factor” standard established by the court.

“Changing Missouri’s law to look for motivation in these cases will bring the state in line with federal law,” said Dan Mehan, Missouri Chamber president and CEO. “Our workers’ compensation system was designed to strike a careful balance between employer and employee so that those injured on the job could be made whole quickly and efficiently. Rulings like this tip the balance, and we appreciate Sen. Schatz’s work to make it right again.”