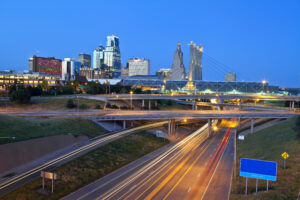 When talking about Missouri’s transportation system, the current status resembles a pileup of bad news.

The state has 860 bridges that are in poor condition. Interstate 70 is crowded and expected to become even more congested in the coming years. Missouri’s transportation revenue is about $50,000 per mile, while the national average is $216,000 per mile.  Road fatalities are climbing.

With this as the backdrop, the newly created Missouri’s 21st Century Transportation System Task Force met today in Jefferson City to begin strategizing ways to improve our state’s infrastructure.

“One easy statistic paints the picture: Missouri has the seventh-largest transportation system in the nation but ranks 47th in funding per mile,” said Daniel P. Mehan, president and CEO of the Missouri Chamber of Commerce and Industry. “Our transportation system is an asset. We must look at spending on that asset as an investment.”

The Missouri 2030 Gallup survey showed that only 37 percent of the state’s business leaders were satisfied with Missouri’s basic infrastructure. One 2016 national study showed that businesses across the nation will lose $7 trillion in sales by 2025 if transportation infrastructure isn’t properly funded. The average family could lose more than $3,400 in disposable income per year.

Earlier this year, the Missouri Department of Transportation said that an additional $825 million per year is needed to improve the state highway system, promote economic development and provide additional transportation options.

The Missouri Chamber is working with the task force and encouraging its members to create a recommendation that will enhance our transportation system in a way that enables economic growth.