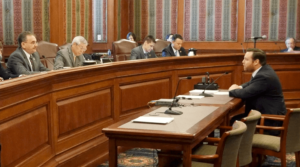 “Discrimination is ugly and wrong. It has no place at work,” said Brian Bunten, Missouri Chamber general counsel. “That’s why we need a strong law that allows expedient action in cases of discrimination and blocks fraudulent claims from moving forward.”

Senate Bill 43, sponsored by Sen. Gary Romine, a Republican from Farmington, would return the law to its intended purpose by abrogating the troublesome Daugherty v. City of Maryland Heights case, in which the court applied a Missouri Approved Instruction, overriding the intent of the Missouri General Assembly.

“A decade of court decisions have eroded our state’s laws and made Missouri courts a dangerous place for employers,” Bunten said. “Often, rather than go through the expense of building a case against a biased court system, employers will settle out of court. That’s not justice. That’s extortion.”