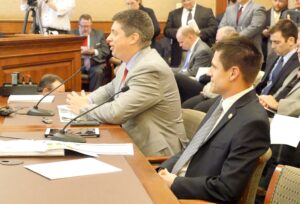 Work to bring tax reform to Missouri took a step forward on Feb. 13 as a Senate committee approved a wide-ranging bill.

Under the proposal, the corporate income tax rate would also see a decrease, dropping from 6.25 percent to 4.25 percent.

The legislation would also raise the state’s motor fuel tax by six cents per gallon over the next three years.

In addition, the bill would adopt the Streamlined Sales and Use Tax Agreement, a move that could pave the way for sales tax collection on internet purchases. Should the state begin collecting these taxes, the personal income tax rate would drop further, to 4.95 percent, under this bill.

These are just a few of the highlights of the package, which also contains numerous changes to personal and business tax credits and incentives. The committee-passed bill is likely to continue to see significant changes as it moves through the Missouri legislature.
In the meantime, Gov. Eric Greitens is continuing to promote his tax reform plan. While the governor’s plan differs in some ways to the Senate committee plan, both aim to reduce the corporate tax rate to 4.25 percent.

“What that’s going to mean is we’re going to have the second lowest, second best corporate tax rate in the country,” Greitens told the board of directors of the Missouri Chamber of Commerce and Industry on Feb. 7.

The Missouri Chamber is closely following all of the tax reform proposals currently under consideration.

“In the wake of the federal tax reform effort, the Missouri General Assembly has a great opportunity to host a discussion about the future of tax policy in our state,” said Matt Panik, vice president of governmental affairs. “Our priorities are ensuring that Missouri has a simple, modern and competitive taxation system that attracts business investment. All the while, we must also ensure that we pass a reform that provides satisfactory resources to the state services and institutions that support our long term economic well-being.”