A far-reaching federal program that could have caused severe economic consequences in Missouri has been put on hold by the Supreme Court.

The new ruling, released on Feb. 9, will delay the EPA’s implementation of the Clean Power Plan as a challenge to the plan moves through the court system.

The Clean Power Plan seeks to reduce the emissions from new and existing power plants. In Missouri, which relies heavily on coal for power production, complying with the Clean Power Plan was widely expected to cause a spike in electric rates—raising costs for businesses and consumers. 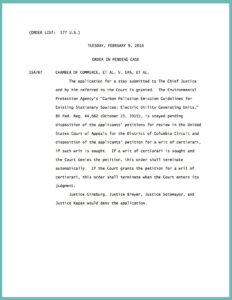 Click to read the Supreme Court’s Feb. 9 order that halted the EPA’s implementation of the Clean Power Plan.

In response, Missouri and 23 other states filed a lawsuit seeking to stop the plan. The states argue that the Clean Power Plan oversteps the federal government’s authority to regulate power plants.

The federal Supreme Court ruled 5-4 to pause Clean Power Plan implementation while the court considers the merits of the case.

“Ever since it was announced, the Missouri business community has been deeply troubled by the potential costs associated with the Clean Power Plan. It would hurt our ability to be competitive and damage our state’s reputation for having reliable, low-cost energy,” said Daniel P. Mehan, president and CEO of the Missouri Chamber of Commerce and Industry. “The Supreme Court’s decision gives the courts a chance to consider if we really want the federal government to have broad oversight over power generation in our country. We stand behind Missouri’s decision to challenge the Clean Power Plan and we remain hopeful for a favorable resolution.”

Missouri business leaders are generally satisfied with Missouri’s current affordable and reliable energy supply. According to the Missouri 2030 Gallup survey released in 2015, only 14 percent of business leaders in the state are dissatisfied with Missouri’s energy supply. Protecting this business advantage is one goal of the Missouri Chamber’s Missouri 2030 strategic plan.

To reach Missouri’s goal, the state would have to consider a variety of options, including whether to transition some of Missouri’s power generation away from coal power in favor of other types of power plants.

The state’s Department of Natural Resources had begun meeting with stakeholders to establish Missouri’s strategy for complying with the plan. State lawmakers have also been working on legislation this session aimed at ensuring Missouri businesses and consumers have predictable energy costs even as prices were expected to rise.

Watch our report from when the Clean Power Plan was finalized in 2015.