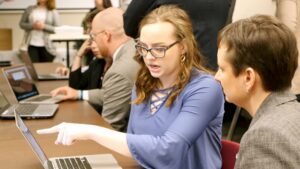 This week at the Capitol, Missouri high school students visited with lawmakers to showcase their coding skills.

Taylor Northern, a freshman at Bolivar High School, is already looking forward to a career in a computer science related field.

“I like the fact that it makes me feel like I can do something for the future because technology is our future and it’s here to stay,” said Northern. “I want to do something with research and medical, and computer science is a really good way to do that.”

“It’s not as hard as you think,” Holt said. “It’s problem-solving, yeah, but it’s not too bad, really. Computer science is really fun.”

The students were in Jefferson City to promote the importance of computer science education. The event was organized by Launch Code and Code.org.

This year Rep. Travis Fitzwater, a Republican from Holts Summit, is seeking to improve workforce development in technology fields.

“As the Chamber has shown through their Missouri 2030 plan, workforce development is the number one issue for businesses in our state,” said Fitzwater. “That makes in incumbent upon the legislature to do things that are necessary to make the environment for workforce development conducive to job growth and what our employees need across the state.”

Fitzwater’s House Bill 1623 would make an online program available to every school in the state, providing an opportunity for middle schoolers to learn about STEM fields. It would also allow students to take a computer science class in lieu of a math or science credit to graduate high school.

“I’m thrilled with the idea of our kids getting an opportunity to learn at an earlier age about computer science,” Fitzwater said. “It’s really important to me that earlier on we’re focusing on giving them the education they need to fill the jobs of the future.”