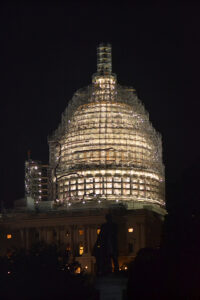 With the goal of taking their concerns to the people that can make change in Washington DC, nearly 30 Missouri Chamber members travelled to our nation’s capital to take part in the inaugural Missouri-DC Fly-In.

“It’s better that you are here than almost any time I can think of,” said U.S. Chamber President Tom Donohue as he welcomed the Missouri delegation to the U.S. Chamber offices, home to one of the strongest federal advocacy groups in Washington DC.

Experts from the U.S. Chamber staff spent a morning bringing participants up to speed and speaking candidly on the federal issues and they underscored the importance of employers speaking directly with members of Congress.

Missouri Chamber members then went to Capitol Hill to speak directly with Missouri members of Congress and their staff. Rep. Lacy Clay, Rep. Blaine Luetkemeyer, Rep. Emmanuel Cleaver, Sen. Roy Blunt and Rep. Vickie Hartzler met one on one with Missouri Chamber members. Staff from the offices of Rep. Billy Long, Rep. Sam Graves and Sen. Claire McCaskill were able to meet and answer questions for the group.

No matter what side of the aisle, members of the Missouri Congressional delegation agreed that a long-term transportation plan has to be addressed. 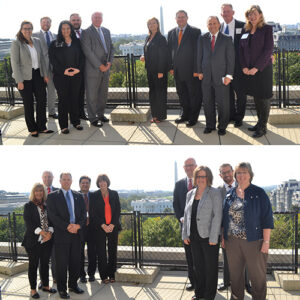 “There are several long-term highway bills that could come to the floor,” said Rep. Emmanuel Cleaver, a Democrat from Kansas City. “One of the problems is that many representatives have signed a pledge that they will never support a tax increase under any circumstance. It’s almost impossible to do anything on transportation unless you do something more administratively cumbersome like assessing a fee on miles driven or through tolls.”

There was bipartisan support for reauthorization of the Export-Import Bank and our members of Congress voiced their frustration that the deadline was allowed to pass.

“We are losing jobs and opportunities by the thousands because of the stupidity of those who are opposing reauthorization,” said Rep. Blaine Luetkemeyer, a Republican from St. Elizabeth. “It’s been an uphill struggle trying to get the truth out about this issue.”

Luetkemeyer pointed to the 1,800 Missouri suppliers who provide parts to one of Missouri’s largest exporters, The Boeing Company. Boeing relies on the Export-Import Bank.

Despite the need to discuss tough issues, Missouri’s members of Congress made participants feel welcomed, opening up their offices and Washington DC venues for guests. Rep. Vickie Hartzler, a Republican from a rural community south of Kansas City, helped arrange the first evening’s function in the historic U.S. Botanic Garden.

“It’s exciting that the Missouri Chamber and all these employers from Missouri are here,” Hartzler said. “It’s important for us to hear from our job creators. I want to be supportive and help create jobs and hear from those employers that are making it work.”

The inaugural Missouri-DC Fly-In was a productive and enjoyable trip. The Missouri Chamber is looking forward to another trip next year. For more information, contact Tammy Long at tlong@mochamber.com or by phone at 573-634-3511.