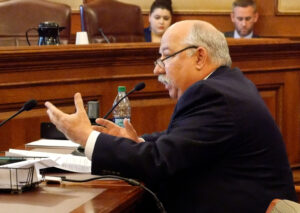 A House bill that clarifies venue laws to ensure lawsuits are brought in the proper court location was passed by the Senate Committee on Government Reform by a vote of 5-2 on April 4.

Missouri’s existing laws have allowed thousands of out-of-state cases to be transferred into the state—mostly to St. Louis courts, which have a national reputation as being plaintiff-friendly. This legislation would end that practice and help address Missouri’s poor legal climate ranking, making the state more attractive to businesses.

House Bill 1578 is sponsored by Rep. Glen Kolkmeyer, a Republican from Odessa.

“Even with the recent Supreme Court rulings, which [have] overturned some of these cases, it hasn’t reduced the caseload. We have judges from all over the state going to St. Louis to help cover their overcrowded docket,” Kolkmeyer said at the hearing.

Justin Arnold, Missouri Chamber general counsel, gave another example of the problem: out of 25 slots to have contested motions heard in St. Louis on a given day, 20 of those were filled with out-of-state cases.

“That means that [for] a plaintiff in-state, if their attorney wanted to go and sign up for a contested hearing on that date in two weeks, they would not be able to because it’s filled with out-of-state plaintiffs,” said Arnold.

The Missouri Chamber continues to advocate for this much-needed reform as it moves toward the Senate floor for debate.

One downside is that this bill was amended in the House to include an effective date. That limits the reforms to future lawsuits only. It does not change any of the cases already clogging Missouri’s courtrooms. The Missouri Chamber opposes this amendment.

Is improving Missouri’s legal climate important to your business? Let us know why.