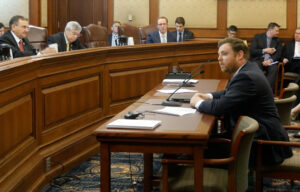 The Missouri Chamber’s Brian Bunten testifies in support of HB 1718.

Work to protect the arbitration system in Missouri continues to make progress in the General Assembly as a Senate committee has passed House Bill 1718.

House Bill 1718, sponsored by Rep. Kevin Corlew, a Republican from Kansas City, would fix this problem. The bill states that in arbitration agreements between an employers employees, the arbitrator must make all initial decisions rather than taking the dispute to court. This system helps resolve disputes in a more efficient and cost effective manner.

The bill now heads to the Senate floor for further discussion.

The Missouri Chamber of Commerce and Industry has been a strong supporter of the bill and Missouri employers have testified in support during committee hearings.

For more information, contact Brian Bunten, Missouri Chamber general counsel and director of legislative affairs, at bbunten@mochamber.com, or by phone at 573.634.3511.