A bill to provide a fix to the state’s impending transportation funding shortfall was heard today in the Senate Transportation Committee. 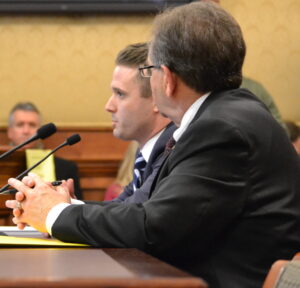 Brad Green, director of legislative and regulatory affairs for the Missouri Chamber, sits beside Sen. Libla and testifies in favor of Senate Bill 623.

Senate Bill 623 proposes an increase to the state’s fuel tax to ensure Missouri has adequate funding to maintain the state’s infrastructure. Senate Bill 623, sponsored by Sen. Doug Libla, R-Poplar Bluff, would increase the fuel tax by one and one-half cents per gallon and three and one-half cents per gallon of diesel. If passed and signed by the governor, the increase would go into effect on Oct. 1, 2016.

“The last adjustment to the motor fuel tax in Missouri was in 1992,” Sen. Libla testified. “And it gradually phased into the current level on 17 cents per gallon in 1996. This rate has remained the same for the last 20 years. We need reasonable assurance that our roads will be maintained and improved.”

Brad Green, director of legislative and regulatory affairs for the Missouri Chamber, testified on behalf of the bill.

“A major component of our Missouri 2030 agenda is addressing the state’s infrastructure problem,” Green testified.  “It’s clear that a safe and reliable transportation network is critical to Missouri and its business community now and in the future. There is no one size fits all solution but we can’t turn a blind eye to the problem at hand and we feel this bill will address some of those problems.”

During the 2015 legislative session a group of Senators opposing almost identical legislation, also sponsored by Libla, refused to allow the bill to come to a vote.

During debate of last year’s bill, the outlook was very bleak. However, MoDOT Director Patrick McKenna made the committee aware that the funding problem is still there, but not as drastic as had been projected.

In December, Congress passed the first highway authorization in more than seven years, which guarantees increased transportation funding for the next five years. At the current rate, no new projects are being planned, however, the state can now afford to maintain all of Missouri’s roads to their current condition and stop the number of critical bridges from increasing.

The Missouri Chamber’s Missouri 2030 plan calls for urgency in developing a true solution to fund improvements to our transportation system. Learn more about the plan at www.mo2030.com.

For more information about transportation issues, contact Brad Green at bgreen@mochamber.com or by phone at 573.634.3511.