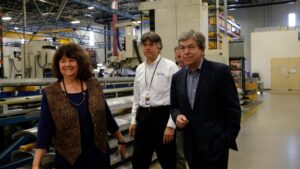 During a visit to Patriot Machine in St. Charles, U.S. Sen. Roy Blunt touted the benefits of the tax reform proposals currently under discussion in Washington D.C.

“There are two things we ought to be doing with tax policy and they both are focused on people who work hard for a living having more money to take home at the end of the week,” Blunt told workers at Patriot Machine. “The quickest way to get that done is to take less out of your check. And the other way to get that done is to have a higher pay to start with. In a growing economy there is going to be more competition for what you do and how you do it and that turns out to be good for the company you work for and it also turns out to be good for you.” 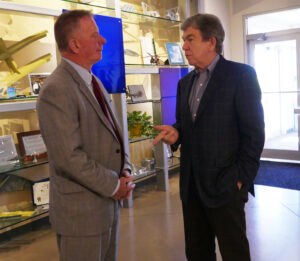 As it stands now, the Senate bill includes:

Regarding the corporate tax rate, Blunt said the rate in the United States is no longer competitive and needed to be lowered.

Dan Mehan, president and CEO of the Missouri Chamber of Commerce and Industry, joined the discussion at Patriot Machine and praised the work to address the problems in the federal tax system.

“We’re here to talk about something that’s broken and needs fixing and that’s our tax code,” Mehan said. “It holds back family owned businesses like Patriot and it holds back our economic growth in Missouri.”

For more information about federal progress toward tax reform, visit the U.S. Chamber of Commerce at: https://www.uschamber.com/tax-reform-now