When it comes to funding Missouri’s public river ports, the state tends to provide either a wave of money or a complete drought.

But what port officials say they really need is a steady stream.

A new proposal in the legislature, House Bill 1989, would accomplish this by taking the roughly $5.5 million in motor boat taxes Missouri receives each year and placing it in a special trust fund to be used to improve Missouri’s public river ports. 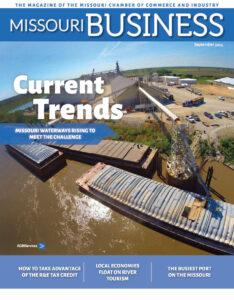 Read our 2015 report on the value of Missouri’s rivers to our state’s economy.

The bill is sponsored by Rep. Becky Ruth, a Republican from Festus. In 2015, Rep. Ruth chaired a special committee tasked with ensuring Missouri is doing all it can to maximize the economic benefit of our rivers.

“One of the things that came out of that is the need for sustainable funding for our ports,” she said, during a hearing on her bill by the House Economic Development and Business Attraction Committee.

The funding for Missouri’s public ports has fluctuated over the years, including several years where public ports received no state funding. In recent years, the legislature appropriated money for port projects but those funds were subsequently withheld by the governor.

Jefferson County Port Authority Board Member Jim Berberich said these uncertainties have made it very difficult to proceed with improvement projects.

“Without having sustainable funds and really being able to know if the funds are going to be available, that limits our ability to move forward with our projects,” he said.

During the hearing, several people testified that Missouri’s public river ports—if properly upgraded—should benefit from the expansion of the Panama Canal. It’s expected that the widened canal will lead to new shipping routes and bring more barge traffic to the Mississippi and Missouri rivers. Some people expect to see barges moving container traffic through Missouri.

“I think Missouri is on the cusp of the greatest economic opportunity since the steamboat,” said Alex Schwent, a board member at the Jefferson County Port Authority. “This state could become the distribution center for the entire United States.”

The Missouri Chamber of Commerce and Industry testified in support of the proposal.

“The ports are a critical asset to Missouri’s economy,” said Tracy King, vice president of governmental affairs. “It’s time to build on this asset, particularly with the expansion of the Panama Canal.”