It will soon be much easier to catch a ride in Missouri thanks to a new law passed by the legislature and signed by Gov. Eric Greitens.

The law opens Missouri to smartphone-based ride-hailing services such as Uber and Lyft and allows them to operate statewide, creating thousands of jobs and generating new wages for residents across the state. 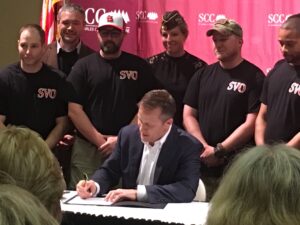 House Bill 130 accomplishes this by revising Missouri’s statutes that regulate the taxi industry. The new law updates the state’s regulatory framework to account for the ride-sharing revolution that has led to new transportation options.

Previously, companies like Uber and Lyft operated under a patchwork of local regulations. The services were allowed in some parts of Missouri, but forbidden in others. House Bill 130 now gives these companies the green light to expand across the state under a consistent set of regulations.

The new law says that ride-sharing companies must do background checks on their drivers and pay licensing fees. Drivers must also have liability insurance.

The Missouri Chamber of Commerce and Industry supported the measure.